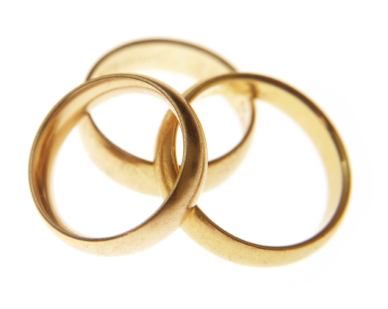 “It’s a small world, but we all run in big circles.” – Sasha Azevedo

If you’ve been around the poly block at all, you’ve heard of at least a few of the many ways that polyamorous folks like to describe their relationships. Even if you are brand new, chances are that you have come across some of this already. Some of the more common configurations include triads, where there are three individuals all romantically involved with each other, quads, which offer a dazzling array of potential connections between the members involved, and the “Vee”, where one person has a romantic relationship between two people who do not have a similar bond between them. Describing these and other more complex configurations in detail can be a formidable challenge. As I mentioned in my first entry, there are lots of different ways people can “do” polyamory, and the community frowns upon anyone espousing a “one true way”.

But I’m not going to write about that.

It’s tough, being different. Doesn’t matter what it is that makes you different, just that you are. We live in an extremely judgmental society. Anyone that is different is “weird”. Not normal. Other. “Normal” people don’t understand us. They ask us why we chose to be the way we are, or why we live the way we do. Or especially why we’re open and out.

I’m not going to write about that either. Though I think I will eventually.

Today I’m going to remind you that one of the reasons why “normal” people don’t understand us is because there aren’t that many of us to begin with. Lots of people cheat on their spouses or significant others, but it would never occur to them to simply ask if it was ok to date other people. Tons of vanilla folks like a little slap-and-tickle with their sex, but the idea of beating their lovers into a bloody pulp, caging them like an animal or making them lick the bathroom floor clean horrifies them. And since they don’t know (or at least they don’t THINK they know) many people that do those things, it reinforces the idea that there aren’t that many people that do it.

They’ve got a point. There really aren’t that many of us, comparatively speaking. Which is why it is very important to remember that there aren’t that many of us. If you can’t play nicely with others and get along, or if you are a raving psycho beast, sooner or later that information gets around. Keep that shit up, and you’ll run out of us alt-friendly types pretty quick.

I can give you a pretty good example from my own life. A few years ago, I started dating my two female partners. They were new to the local poly scene, and didn’t know any of us yet. At the time, I was living with a female partner. She was dating the husband of the woman who helped run our local poly support group. Her boyfriend helped her run it. A few months later, one of my new partners broke up with me and started dating a new man. It all worked out, they are both partnered to me now, but that’s another story. Her new boyfriend was married. His wife started dating the boyfriend of the woman that ran the poly group. So we were all connected in a large circle, with no cross-spokes. All of the romantic and sexual relationships stayed completely on the edges. They followed the circumference, if you will.

So if you started to date any one of those people, the rest in the chain quickly found out about it. And if you were crazy, or dramatastic, we found out about that too. And so did the poly people that we weren’t intimately connected with. Two of those people were the leadership for our poly community. They knew a lot of people, including folks in other poly circles in other cities and states. You never know just how people are connected, especially in the poly world. I don’t know about where you live, but around here, the local polys are a damn near incestuous bunch. We all know each other, for the most part, and if we haven’t dated a particular individual, chances are one of our partners (or their partner) has.

Another story from my life. A few years ago I was at a science fiction convention in the Boston area. It’s one of the largest around, and has a lot of really good programming for poly, kinky and alternative people in general. I was sitting on a basic polyamory panel with four other polys. Naturally, we all knew each other, despite a decent level of geographic diversity. Before we got started, I jokingly remarked that I could trace a connection to every person on the panel. Much to the surprise of the person on the far end of the table!

It’s always important to remember to play nice with others, or pretty soon no one wants to play with you. That is as true in the sandbox as it is in the dungeon. It applies to every group or community you belong to, even the “normal” ones. So don’t forget. In the poly world, our circles are a lot bigger, and a lot smaller, than you think. While it is possible to be single and poly, it’s not as much fun as the other way.