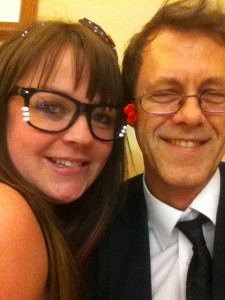 Lolita Hayes is currently studying Clinical Psychology, with plans to practice in the alternative lifestyle community. When not pestering Daddy for more candy, she balances her busy vanilla life with a kinky polyamorous lifestyle and exploring her little sides. She runs a popular tumblr blog about DD/lg and hosts a popular monthly tinychat party for Littles, among all the other community events she and her Daddy lead. She likes Hello Kitty, ruffles, Polka Dots, bows bows bows, and most of all Daddy!  She turned 8 for the 20th time this past March.

“A Daddy Dom and His Little Girl“ This column follows the adventures of Daddy Vinnie and his little girl, Lolita Hayes, a consensual, adult DD/lg relationship. Come along on this pervy yet sex positive journey as they share the intimate details of their taboo age-gap relationship, complete with insight into their poly lifestyle, training a service submissive, age play, pet play, power exchange, regression, and all things DD/lg.