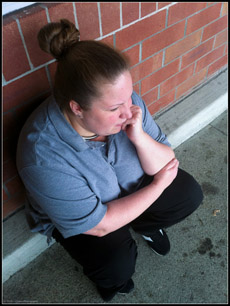 Biography: Rayne’s kind of a hippie, often talking about how her dream is world peace, and wanting to help her fellow man. She believes in “Live, and let live.” and tries to keep an open mind about everything. But she’ll freely admit she hasn’t always been this way.

Rayne is owned by Melen, and has been his live-in slave since 2002. Although not yet active in the public community (Here’s to changing that in 2011!), she has been active in the online community in some way since then.

When she noticed a severe lack in honesty about the realities of being owned, Rayne began writing a (mostly) no holds barred, and often humorous, look at what it means to belong to her owner in 2003 at Insatiable Desire. In 2009, she began a weekly column at Eden Cafe that started as a basic look at M/s, but has strayed from that path a time or two. And she’s currently working on a series at Submissive Guide about how she and her owner balance her mental health issues with her slavery. Her hope is that people who read the things she writes walk away with the understanding that there’s more than one way to do things, and everyone stumbles once in a while.

“Implicitly His” A look into what it’s like bending completely (mostly – Nobody’s perfect!) to the will of another. Rayne writes about the things she’s learned about herself, her husband, and life in general through being owned.
Avatars by Sterling Adventures