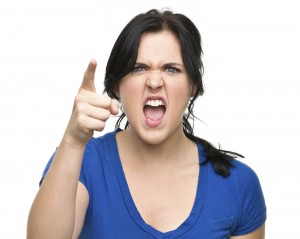 You know how it goes; someone does (or doesn’t do) something, and you get pissed off.  In the pissed-offness, you say something to the effect of “you made me angry,” and things go from there. Well, my friends, I’m here to suggest something to you – something that might just shift a paradigm you’ve held for a long time. I’m here to make a suggestion that, if you choose to adopt it, will make it impossible for anyone to make you feel angry (or upset, or frustrated, or dumped, or anything else) ever again.

Ready for it?  Are you sure?

It’s impossible for anyone to make you feel anything, good or bad, without your permission, because you are the owner of your feelings… not them.

Some of you are probably in a headspace of “Is Bendy really telling me I shouldn’t get angry when someone does something shitty in my general direction?” I am very much NOT suggesting that.  What I’m suggesting is that your feeling, while brought upon in response to a stimulus, is actually something you have chosen – consciously or unconsciously, and that choice is 100% within your power, even when it’s justified.

Byron Katie, says it this way: “There are only three kinds of business in the universe: mine, yours, and God’s.”  If you are not a theist, you can edit the last kind of business into something like “the universe’s” or “nature’s”.

If there’s a huge storm, that’s the universe’s business.

If someone is late for a play date with you, that’s their business.

If you get angry at the person for being late, that’s your business.

I chose this example around tardiness, because it’s a huge hot-button for me. My thoughts about people who are late for things is that they are manipulative and selfish, and I take it personally when someone is late… If this happens regularly, I get angry. My anger is in response to someone being late, and yet – I don’t have to feel that way. I could feel any number of other ways, including happy that I have more time for whatever I’m doing in the moment. All depends on my thoughts about the situation (which are my business).

“So what do you do about it, Bendy?” Well, my friends. I do what I can to not to impose my negative thoughts and feelings on the person, and I will tell you that this is an area I’m constantly working on.

When you frame your feeling as something that is yours, then you are in a position of great power. With power comes choice; and with choice?  Response-ability – as in you being able to respond, rather than react.

Here’s a very recent example from my own life:  Last night I was really pissed off at a play partner, because he didn’t call me to talk about something that was upsetting me.  I found myself thinking he was being uncaring, feeling upset and isolated, and my train of thought continued to make him wrong for not magically knowing that something I texted him was actually very important to me.

A couple decades ago, I would have called him and started a fight. I would have had ammunition to bring to the fight: “I texted you that I was having some challenges around that thing and you didn’t even call!”

Maybe I would have said something like “If you care about someone, you want to call when they are upset” Ever hear that?  Words like that ever come out of your mouth? Bendy don’t play that any more.

Rather than taking the fight course, which a part of me very much wanted to do, (a whole bunch), I sat with my feelings and thoughts, and I did a little self-reflection, asking myself questions such as “Is it reasonable to expect him to (magically) know how I feel?” – well, no.  It isn’t.

Another question I asked: “Have we negotiated that he will call me whenever I’m upset?” – again, no.

Then another question: “Am I really upset that he didn’t call, or is it the thing that I texted about which I need to be addressing?” – I was mostly dealing with an emotional response about a category of activities – not him.

And finally: “Is he the best person for me to have a conversation about the thing?” The answer to that question was no.

I have a friend who would be much better to talk with, so I called and asked him if he had some time to help me work through something that was bothering me.  Once he said yes (please note that I got his consent to the conversation first), I told him what was upsetting me, shared how unreasonable my thinking was around expecting my partner to just magically call, etc…   Within about 20 minutes, I was able to not only express my feelings from a place of truth in me – I was also able to explore and identify some of the stuff that was brining them up.

So bringing this back to the idea that someone can’t make you feel a way without your permission… I was feeling upset about something. This is true. My partner didn’t make me feel that way – he behaved and I reacted. Period. Once got to a place of clarity, I was able to release my anger towards my partner and move back into a place of excitement, submission, lust and all the wonderful feelings I enjoy cultivating with regards to this person.  By choice.

Be well and happy!

One Response to “You make me so mad!”

is the Director of Community Outreach for NELA, where her tendencies towards connection and networking are put to great use. She has been teaching for over 30 years and has been kinky just as long. Bendy is committed to serving community and to creating safe spaces in which people may learn and grow. Her teaching style is humorous and interactive: just like she. Bendy is a lover of rope, deep impact, sensation, takedowns, and having fun! She’s been going into trance states since kindergarten and finds S/M to be a powerful catalyst for cultivating alternate states of consciousness and creating pathways towards spiritual awakening and self-realization. A full-time teacher, just about any workshop you take from Bendyogagirl at a sex-positive event, you might find yourself taking at work. All of Bendy’s curricula are heavily influenced by the decades she has been practicing Taoism, and yet she will frequently invoke the wisdom of Jung, Buddha, various physicists and even her parents and friends. Bendy can be located online at Bendyogagirl.com, Bendyogagirl.blogspot.com, Twitter.com/bendyogagirl – and you can email her at – you guessed it – bendyogagirl@gmail.com