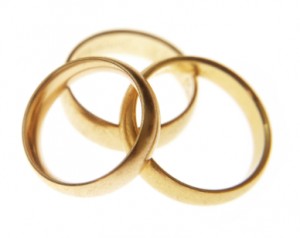 I’ll admit it, I really enjoyed the TLC documentary series “Sister Wives,” which recently aired its first season finale. For those who didn’t catch it, Sister Wives followed a polygamous Mormon family in Utah. Kody, the husband, had three current wives, over a dozen children with another on the way, and was courting a potential 4th wife with a few kids of her own to add into the family. While I didn’t always agree with their point of view, I did enjoy what seemed to be a well rounded and fair presentation of polygamy. I also found that so much of what they had to say about communication, trust, respect, and family echoes what I hear from the polyamourous community.

Now this family is under investigation for violating Utah’s bigamy law.1 The legal geek in me perked up when I heard this news. How can that be? Only one of pairing is legally married. And if this is something that this polygamist family in Utah is now dealing with, how might it also affect polyamorist groups? Could polyamory be illegal?

So the fact that he is legally married to only one of these women may not help him, he called each one his wife and had a wedding ceremony with each, therefore he “purports to be married.”

He also lives with three of these four women. They share a large home, each wife with a separate living area. This could be considered cohabitation. Cohabitation is also pretty broad, would roommates violate this bigamy law? Based on the wording of the statute, I think the argument could be made.

This bigamy statute has been challenged in the Utah Supreme Court several times, on personal liberty, privacy, and religious freedom grounds, but has been upheld every time.3

After examining the law in Utah, I decided to look up what my own home state had to say about polygamy. Massachusetts also forbids multiple marriages, stating “whoever, having a former husband or wife living marries another person, or continues to cohabitate with a second husband or wife in the commonwealth shall be guilty of polygamy.”4 The way I read it, unlike Utah, the Massachusetts law requires a legal marriage, not merely purporting to be married.

But, there is another legal challenge to consider. In many states, there are laws that still prohibit adultery.5 This is of definite concern to polyamorus people. While I don’t think that it is likely that you will get arrested or prosecuted for committing adultery, could it get used against you in a divorce? Or while asking a judge for custody of your children? Maybe.

The family in Sister Wives took a gamble, knowing that being open about their lifestyle could cause a significant backlash. So do the many people who live openly in alternative lifestyles. So, while I don’t believe polyamory is illegal, there are some laws that could cause a poly family some complications. However, as more people are willing to step up and be open about their lives, the more common and acceptable these lifestyles may become hopefully causing a call to challenge these laws.

This article is presented for informational purposes only, it is not legal advice. If you have specific questions please consult an attorney in your jurisdiction.

This article was originally posted November 6, 2010

Biography: As a solo attorney practicing in Western Massachusetts, Aimee is a polyamorous, kink, and queer friendly professional who focuses on child welfare, domestic relations, and basic estate planning. She is a member of the bar in both Massachusetts and Connecticut. Aimee is also on the board of Transcending Boundaries INC, an education, activism, and support group for persons whose sexual orientation, sexuality, gender identity, sex, or relationship style do not fit within the binary confines of male or female, gay or straight, monogamous or single.