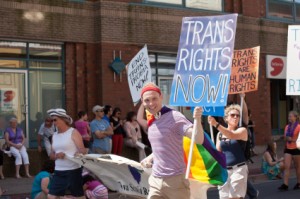 Recently, I read the book “Feminism is Queer” which explored the intersections between feminist and queer theory from a theoretical standpoint. There was an entire section devoted to the topic of gender and I couldn’t help but to feel inspired to talk about how gender ties into oppression and feminism in so, so many different ways.

To start, to be transgender means that your gender identity does not fit into the binary structure that our society (or the structures of any other) has created, that being male and female. For these folks, the gender that they were assigned at birth, based on their biological sex, doesn’t match with or fully encompass how they relate to themselves, the world and doesn’t mirror their personal identity.

Transgender is an umbrella term, meaning that it is encompassing of a range of identities that all fit under its premise. It includes everyone from transsexuals (those who are in the process of changing or have changed their gender to be that of the opposite sex) to gender queer’s (all people who don’t identify under the binary gender structure), to agender’s (those that are not a man nor woman) and those that move between gender’s, who might call themselves gender fluid (but this is certainly not a complete list).

The idea that gender is not a binary system with only two definite possibilities is one that is at the heart of queer theory. Queer theory is a movement in academia (as well as in activism, but to a lesser extent) that lies in the premise that gender, sexuality and biological sex are fluid and limitless and that the power structures that exist around enforcing the hegemonic nature of these is oppressive. Queer theory is a rejection of heteronormativity (assuming everyone to be default heterosexual and the enforcement of heterosexuality as the norm) and a two-gender and two-sex system of identification.

Queer theory uses theoretical ideas, philosophy and structure that reject hierarchal power structures and order that exist around sexuality. Any type of power system that enforces domination is fought against and shown to be repressive by limiting the possibility of diversity. Range, freedom and expression are ideas that are all encouraged and thrive within this discipline.

Unfortunately, outside of queer theory, the idea of people identifying as transgender has not been embraced or celebrated. The trans community is not well understood or embraced by society and gender-bending can have serious social consequences. Because of the constructs that we hold around masculinity and femininity (and how men and women are supposed to live up to them) it makes going out of this rigid framework extremely difficult.

The trans community also doesn’t receive a lot of support for the LGBT community, as most groups, organizations, events and action associated with the term are geared towards the LGB. Quick, name the last state that passed a law outlawing trans discrimination! Chances are that you probably can’t. Now, name the last state that granted marriage equality to lesbian and gay couples…chances are that you probably at least have a clue.

The fact is that transgender individuals also experience a disproportionate amount of abuse, violence and discrimination[1]. One study found that 40% of police-initiated violence targeted those who were transgender[2] and that 83% of Male to Female transsexuals and 85% of Female to Male transsexuals reported experience verbal abuse because of the identity status[3]. The same study also found that 17.5% were homeless or didn’t have a stable housing situation and that about half had experienced some type of employment discrimination because they were transsexual. Clearly, being transgender in our society is no small feat.

Because of all of this, we have to be more aware and take action. As we consider ourselves to be open-minded about sexuality, it is our duty to advocate on behalf of the transgender community. True equality will never come about until we give this group a voice and allow ourselves and others to get out of the boxes we have created for them as “male” and “female”. We have to explore gender and allow ourselves to think fluidly instead of rigidly. Being transgender has the ability to be perceived as a normal and beautiful way of seeing yourself and the world, but it’s up to us to allow it to be.