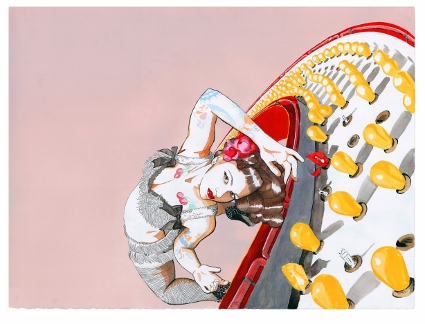 Artist Laurenn McCubbin’s work commands your attention. You can’t ignore her bold lines, her combination of text and illustration, or her smart edgy narratives, which challenge institutionalized ideas and old stereotypes. The Las Vegas-based artist has explored sex and sex work in fine art, comics, and illustration. Recently, McCubbin did a piece where she pulled people aside at Kink.com’s San Francisco Armory to discuss intimacy. She conducted the initial part of the project during the ‘Thin Line Between Art & Sex’ fundraising event, an explicit evening of sexy performances, art and play exclusively for members of Madison Young’s sex-positive art gallery, Femina Potens. I chatted with McCubbin about her current work in progress, sex work, and creating sexually charged work.

I want to talk to you about your project at the Armory, As someone who loves art, it’s always interesting talking to an artist in process and in progress, but first I was wondering if you could describe the project you did on The Upper Floor?
Sure, one of the things that I am exploring in my work right now is interviewing people whose stories don’t often get told in the mainstream art world. I’m trying to get new ideas and new viewpoints on different questions. I was struck by was the idea that everybody was doing things that everyone thinks of as being rather intimate, and they were doing them in a public setting. Not only were they in public at the Armory, but it was also being broadcast on the Internet on Kink.com. I wanted to take people aside and talk to them about their ideas of intimacy and then talk to them about what they might consider too intimate to share in public. I did those interviews and I’m going to give everybody who participated an interview, but it’s probably not going to be their interview. So, they will be sharing these intimate ideas with strangers.

You’ve been with this project for about a month. How has this piece evolved for you since you originally conceived of it?
One of the problems that I always find after doing these interviews is when watching the interviews I go, “Oh man, there’s like a million more questions that I would want to ask.” The hard thing is letting go of the idea of these things that I didn’t think to ask. I want to construct a storyline for each person. I want to be able to tell their story in the most honest and open way. I try not to put my own agenda onto anything anyone is saying. Right now, it’s really familiarizing myself with each person’s story.

What’s the most interesting part about this piece for you, from an aesthetic standpoint?
For me, it’s the construction of everyone’s character because everybody comes to the interview with their public persona, the person that they are when confronted with a camera. They present themselves, and it’s interesting to me who is able to drop the public persona and be very open, and who has a problem letting go of what they project as themselves and letting us see their authentic selves.

You’re work has examined sex in a myriad of ways: from illustrating Michelle Tea’s Memoir, Rent Girl, to your recent gallery installations examining the way sex work exists in Las Vegas. What is it for you that keeps you passionate about investigating sex and sex in people’s lives?
Well, I have a real connection with sex work in general. I’m very much an activist in that I think that sex work is real work. Sex workers are doing a job and they should be treated with respected. For me, it’s very important that that narrative get out into the world. That’s definitely my passion and why I keep coming back to this. There’s also a familiarity and an empathy. I have had the journey that a lot of us who are in the industry or who are in edgier artistic endeavors have where we confront our own issues with what comes along with sex and sex work: body issues, feminism and thinking about how this sexual life can be portrayed in our real lives; again, the border between intimacy and your public personae. I’m fascinated with exploring how people are able to have these conversations.

You just mentioned the edgier side of the art world. How do you perceive it and how do you see yourself existing in that world?
It’s a strange and fine line to walk. Whenever you start doing work that has a sexual connotation you have to be very careful that you’re pigeonholed or pigeonholing. I don’t want anyone to perceive me as that’s the women who does work about sex or that’s the woman who does work about hookers, because I’m trying to make it part of the everyday conversation. It’s also interesting how other people’s issues come up. You have to confront those issues without being really pedagogic around it. You can’t say this is the way you have to think. You have to let people come to it how they’re going to come to it.

For sure. So, this has obviously changed your understanding and appreciation of intimacy both from the experience of creating the work and from your experience in sex work. Can you reflect on that?
This whole process has caused me to look at the way I approach talking to sex workers. When I approach doing work about sex workers—even though I’m a former sex worker; I was a stripper—I have always been removed. It has always been about my observations rather than my involvement. Doing this intimacy project has really caused me to think about my involvement and think about how do I as an artist really step into this in a way that I am comfortable. I am definitely not a person who is comfortable being sexual in public. I have nothing but respect for people who are. So how do I resolve those issues in my work? I am working on a piece right now that’s going to be more about me breaking down those barriers between the impassionate observer (who is just documenting) to being an active participant to a point where I am still comfortable with it…and maybe even uncomfortable with it. I think it’s important for artists to not get too comfortable.

Absolutely. For my final question, I’m going to turn the tables, and ask you: how do you define intimacy?
For me, it’s definitely about the unspoken connection you can have with the person you are being intimate with. The things that I am not willing to share in public—I already said to you that I’m not comfortable being sexual in public—but beyond that, it’s the emotional intimacy that I think is the hardest to really be allowed to be on display. It’s the hardest thing to cry in public or to let my guard down enough to let people know my genuine feelings about things. Definitely, there are some things that I save for my partner and there’s this further exploration of what am I comfortable with sharing with the world.

Check out some of Laurenn McCubbin’s work (some NSFW!)…

2 Responses to “Interview with Laurenn McCubbin”