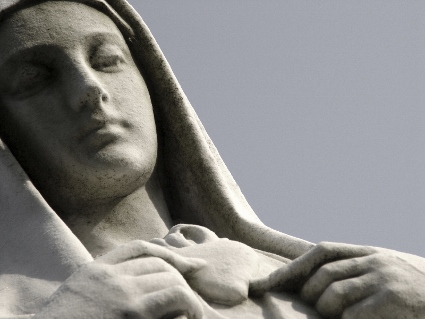 Having my daughter go through Catholic education has been helping to educate me too. I wasn’t raised Catholic, so there are huge gaps in my knowledge of saints, for example. Last week, my daughter was told the story of Saint Teresa de Ávila in Sunday school, and we had a conversation about St. Teresa’s vision of Jesus and what exactly that meant in practical four-year-old terms. Explaining religious ecstasy to the literal mind of a child is challenging on the best of days. Apparently my explanation was really lacking, because in the end she said, “Jesus in the clouds is crazy, mommy.” The truth was that I wasn’t even sure what religious ecstasy meant or if I was interpreting St. Teresa’s experience with any degree of accuracy, so I did a little research.

It turns out that Saint Teresa de Ávila led an eventful and interesting life. Religious visions were the tip of the iceberg with this woman. She believed strongly in living a pious life removed from material wealth and concerns, so much so, that she lived her life without wearing shoes and believed in daily flagellation. She began a reform amongst the Carmelite Nuns and founded seventeen convents. She ruffled so many feathers with her preaching of piety that the Inquisition was set to process her. She wrote extensively about her mystical thoughts, and her motto was: Lord, let me suffer or let me die.

It was the last part that caught my attention. Suffering. I don’t claim to suffer at the hands of my Dominant in the same way as one would endure suffering for their God, but I understand the purity of that focus. For some of us, enduring torment at the hands of another can be a pathway to bliss. Saint Teresa had her own brand of masochism traveling the countryside without shoes and flogging herself as part of her daily ritual. She expected her reward in heaven whereas I expect mine at the end of the scene. I must also point out that my torment is consensual. It is not visited upon me by an unseen God but through a series of negotiations with my owner. But I understand that drive to please another, to tell yourself that you will do anything to appease them and to fulfill the tasks you were given. It’s a beautiful almost peaceful feeling to narrow your vision to that one goal, so I understand Saint Teresa’s drive and need to take action.

Suffering wasn’t a feeling that my four-year-old would relate to nor were the religious visions. Clearly “Jesus in the clouds” was not making an impression. If I was honest with myself, I would have to admit that the Saints weren’t something that I readily connected with besides being part of the Nicene Creed that I recited every Sunday at church. So what was I going to do with my new found knowledge of St. Teresa?

I started to rethink the conversation I had with my daughter to find a different angle. Perhaps it wasn’t necessary to understand how the visions “worked” necessarily or to discern what were illness-fueled fever visions versus an angel from God. What I found most admirable was her dedication and perseverance. Her suffering for God aided her focus, and in the end, that benefited a lot of people. She worked within the system to create change, and she did it with immense success. She was a rebel yet worked for the greater good. And that is an example that I want to pass on to my daughter.