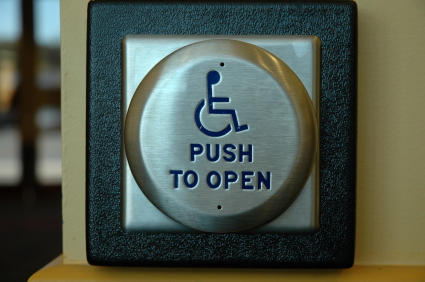 You’ve seen The Princess Bride, right? I mean, everyone and their lover has seen it. Anyways, in case you haven’t, here is the important part. This guy uses the word “Inconceivable!” all the time, and most of the time, it’s not quite right. A funny part of the move is when another person says “I do not think that word means what you think it means.”

Why the long lead in? Because I feel like accessible is a word that all sorts of people use, and I just want to look at them and say “I do not think that word means what you think it means.”

From a disability centric stand point, accessible is being used more and more commonly. Places say they are ADA accessible, events put accessible on their flyers and more.

However, I’d like to make a few statements about this.

Firstly, ADA accessible has a lot of specifications. Most places that claim to be accessible are not officially ADA accessible. Do you have a handicap MARKED stall in the restroom, with a railing? If not, you’re not accessible by ADA standards. Please don’t say that you are. Now, it’s ok not to be ADA accessible – a lot of smaller locations, especially those in older buildings, can’t get up to that code. However, if you can’t, don’t say that you have done so, as it pisses people off when they show up, and still can’t have the access that they need.

Secondly, please take multiple types of disability into account. That’s great that you have an elevator, but if you have to go up stairs to get to it, it’s NOT accessible. Same goes for doorways that are too narrow to fit most wheelchairs. Not accessible. Are you calling your event accessible? To many people, that means that there will be an ASL interpreter for the hearing impaired. If you don’t have one, and it’s a spoken event/lecture, how accessible is it really? Please just stop and think for a second before using that word.

Now let’s look at other definitions of accessible, particularly within the sex positive community.

Accessible can mean affordable. Don’t forget that people of ALL socio-economic backgrounds and income levels deserve to be able to learn about sex education, and/or attend play parties. If all of your events are $30+ (or even $10 with no sliding scale, or way to volunteer to offset the entry fee), you’re excluding entire communities.

How about accessible via public transit? Now, not all cities have public transit that goes all places, but if you live in a city that has pretty good mass transit, please consider that when planning events, or opening new stores/centers/dungeons. Lots of people don’t have cars (or the ability to pay for cabs) , but still are interested in attending events and learning about sex ed. Let’s make sure to be inclusive there.

The list goes on and on. Accessible can mean having bilingual person at events, helping to explain what is going on to people for whom English is not their first language. It can mean advertising in communities outside those that usually get to know about sex education workshops and kink events. In can mean going after under-represented communities to find out what would make an event/class more accessible to them. It can mean many things…but often, I do not think that word means what you think it means.