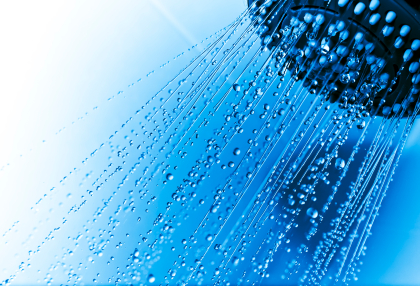 When I was in college and stuck in the middle of writing a paper, I would take a shower. I liked showering in the elegant bathrooms in the dorms – the stalls themselves were beautiful, white and gray marble that echoed the splattering of water, the black and white basket-weave tile carefully preserved on the floor. Each shower-head had a plastic card hanging from it with instructions on how to perform a breast self-exam. The cards were pink and purple, the women drawn in the small pictures curvy and full, their pen and ink forms demonstrating how to check for tumors while the bathroom filled with shampoo-scented steam.

I thought up my senior thesis in the shower, as well as the paper that acted as its catalyst. It was in the shower that I contemplated performative gender, heteronormativity, and deconstruction after first reading about them in seminar, and where I practiced the precise verbiage I would use on an upcoming genetics exam. It was comforting with the bathroom door open to the hallway with the familiar sounds of classmates; women shuffling from room to room who gossiped about boys from neighboring co-ed colleges, who were admitted to graduate school, who fell in love with each other. My mind always wandered to the answer, whether it was a reference to Milton’s “Paradise Lost” or a specific mutation displayed in the phenotype of the pea plants I was growing in lab.

I came out as femme in the shower after being the victim of a horrible haircut. The haircut itself probably wasn’t very bad, just very butch and reminiscent of 1997, when every boy in middle school had acne and a mushroom cut. In a valiant and noble attempt to be out and proud, I emerged not as a lesbian swan, but an androgynous, awkward duckling. My room was at the end of a long hallway, doors on one wall, the other with horizontally situated rectangular windows that acted as mirrors and accusatory provided me with my now hideous reflection as I walked to the shower, vulnerable in my towel and freshly shorn head. I cried in the shower that night, because I realized that all I wanted in the whole world was to have my boring, shoulder-length brown hair back. I wasn’t butch. I belonged in a pink sweater and a set of pearls. Why had I let myself get talked into this? Why couldn’t I have come up with a better response to “well, you don’t look gay”? Why was I now sobbing in the shower upon realizing that my bottle of shampoo would last until the end of spring semester?

Around the same time, I made friends with a cute transguy (FTM). He walked to the shower fully dressed and left the same way, unwilling to pad through halls in flip flops and a skimpy towel. As he cut his hair shorter and shorter and encased himself in a binder, I learned to do amazing things with bobby pins, lipstick, and push-up bras. As a late bloomer, I was both ecstatic that I could fill out a bra from Victoria’s Secret and horrified by the lack of hair on my reflection in the mirror. We found each other at the right time, our own individual ugly duckling to swan transformations discussed at length over Judith Butler and instant miso soup, the intensity of the relationship tapering as he transferred to a school across the country and started T while my hair grew into a layered, chin-length bob. I returned to school the next fall with high heels and lost my virginity to the one and only leatherdyke I knew.

The shower in my apartment is a bathtub with a round curtain rod, as the wall next to the tub is only partially tiled. The bathroom is very much mine, as G’s glucosamine tablets and electric toothbrush are stored under the sink, as not to clash with the pastel-colored bottles filled with what G affectionately calls the “lotions and potions.” It is a femme bathroom, for sure, with delicate tile work, flooded with light filtered through the floral shower curtain. It is here that I begin the day and decide what to wear, rinse the dye out of my hair, shave my legs, and think of the next “Freak Flag” article.

I no longer cry about my now realized femme identity while lathering up, though I still think it’s important to establish and honor the need for a sanctuary of self, even within the confines of one’s own home. Perhaps it’s the solitude that I enjoy so much – the freedom to think beyond the chatter behind the gray marble walls, outside the sounds of my partner’s pancakes cooking on the stove – while still feeling connected, the water through my hair as a reminder of where I came from and where I’m going.

Viola is a queer femme dyke with a penchant for pearls, thick leather-bound books, and the current state of queer theory. Her first kinky experience was in the 4th grade, when she developed a literary crush on Miss Trunchbull, the headmistress in Roald Dahl’s Matilda. This sapphic revelation caused pigtails to be her hairstyle of choice for much of her young life and as well as the cultivation of a desire for strong women wielding riding crops.