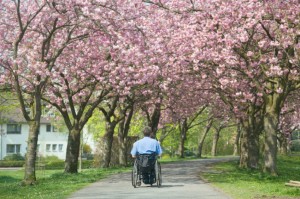 The first unit of the literature component of my Grade 9 English class was Greek mythology.  The myths chronicled in our textbook were brief and to the point, with high drama, complex relationships, and yet a familiarly human element.  What was presented as a series of random stories coalesced into a universe with rules and social mores all its own.  There were gods and goddesses of nature, war, and, best of all to a young eager mind, love and sensuality.  Aphrodite—even the name was, and still is, delicious.

As I recall, Grade 9 health class didn’t include sex education; my foggy memories include discussions of menstruation and exercise.  Yet I feel certain that if we had discussed sex, we would not have learned its mythology

As I prepared to write this month’s column, looking at how cultural beliefs and teachings about sex and sexuality exclude, even negate, the experiences of people with disabilities, I began to see a mythology, a set of stories we’ve been told and are telling ourselves.  I’m afraid I am not creative enough to invent a selection of deities with interesting names, but I can tell you some of the things they would be in charge of: guilt, shame, helplessness, independence and separateness, silence, and procreation.     So, in essence, we have a sexual universe built on isolation and reproduction.

How does this affect people with various disabilities and illnesses?

Let’s take the imperative that sex is only for procreation.  This isn’t a realistic view of what sexual expression actually looks like, but it’s still very much what dictates the kinds of sex people think are okay and the kinds of people deemed able to be sexually active.  Opinions abound on whether people with disabilities should or shouldn’t have children, and these opinions are voiced both loudly and softly.  The loud voices state policies that govern, oversee, and judge the parenting of people with disabilities.  The concerns are stated to be the safety and development of the child, but are based on rigid notions that rarely reflect reality, not to mention that nondisabled parents aren’t subject to the same sscrutiny based on—oh, I don’t know–their lack of a recognized disability.  The soft-voiced opinions come from the nosey questions and clucking tongues, asking whether a couple is going to have children, or murmuring sympathetically that of course they’re not having children; it would just be too hard with the disabilities and all.  A blind friend of mine used to have a little fun with people.  When the question of “do blind people have sex?” would come up—and I’m really rather baffled as to how people think we couldn’t or why they’d think it’s okay to ask such a question in everyday conversation–she would smile innocently and ask her own question: “Well, my husband and I don’t have any children, do we?”

A caveat:  I do believe child welfare is paramount, but I do not believe there is only one way to do anything, including parent.  Furthermore, the uninvited intervention of social or legal service providers based only on the presence of disability is usually inappropriate, and is, I fear, the modern equivalent of controlling sexuality and reproduction through permanent or temporary birth control measures.

Let’s get back to our mythology, shall we? What of our deities of shame and independence. Shame, plus the negative messages given people about the acceptability of their bodies, means that lots of people don’t feel comfortable being sexual unless the lights are off.  This doesn’t bode well for someone with a hearing impairment who needs to sign or read lips and watch body language to communicate, or to aid in communication.  (Lots of people with hearing impairments can speak and hear speech, but they might have trouble doing so or feel more secure with other communication methods to back up their hearing.)

There’s also this idea that people should be able to do everything independently, including sex.  So someone who uses a wheelchair or other mobility aid, who needs help in and out of bed, and even in changing position, can be made to feel disadvantaged, like they’re somehow a less able or interesting partner.  Our deity of guilt makes sure that sex isn’t something that’s okay to talk about, making it difficult for disabled people with limited access to public places to ask someone else to help them go out to buy safer sex supplies or sex toys.

This is only a start.  Since I began this piece talking about school, here are your assignments. Don’t worry, I’m doing them too.

What are some other beliefs about sexuality, positive or negative, and how do you think they would affect someone who is viewed as disabled or otherwise “other”?

How can we create a more balanced, positive, and inclusive mythology of sex (deity names not required, but certainly welcome)?