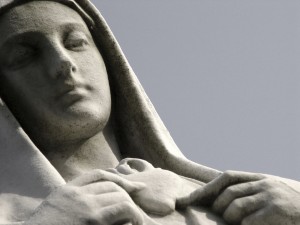 Modern mythology can be an amazing tool to bring the sacred into our lives, to change the way we think about the world for the better… but it is also used, often unconsciously, to preserve prejudice, support misinformation and perpetuate violence

What were you taught about your virginity? How did this play out in your sexual experiences, either with virgins, or as a virgin yourself?

ShirinSadeghi’ stake on virginity in Ceasefire Magazine summarizes the scholarly opinion on the subject (or at least, what people managing to get books published in the topic think):

“[A] woman’s virginity is realistically a non-issue (and actually impossible to prove) but politically a powerful tool of containing women’s independence and dominating a woman’s ability to explore herself and her world.”

So why is modern mythology so sure of the virtue, value and violence of this “coming of age” event?

The bottom line in virginity mythology is that a woman who has not been penetrated by a man is somehow more “pure” than one who has, regardless of whether or not that sexual encounter was consensual. Not only does this perpetuate the idea that sexual violence shames victims rather than perpetrators, but it creates an impenetrable veil of mystery surrounding the phenomena of female sexuality. It tells women that they lose something of themselves when they finally give in to their desires, rather than showing them how much they can gain from understanding their sexuality and owning its powerful potential.

Not only does a woman lose something the first time she is intimate with a man (because in normative virginity mythology, sleeping with another woman “doesn’t count”), she loses incrementally every time she has sex with someone else, every time she expresses a desire for sex, every time she masturbates. The more interest a woman shows in sex, the more she risks being shamed – called a “slut” with the implication that women who have “given it away” to “too many” men loses all her power… becomes worthless.

When we believe that women lose through every sexual interaction, then it seems reasonable to assume that she must be, at least in part, giving that thing up unwillingly. It makes it okay to “take” sex rather than share it.

Pop her cherry, break the hymen, take/lose her virginity… the language we use to describe virginity is inherently violent. The long and short of it? We have a fundamentally flawed understanding of female anatomy. I’ll let the amazing Laci Green explain it to you:

Using language that suggests that blood and pain are a normal, natural part of sex perpetuates a society in which sexual violence is acceptable and women’s pleasure is optional at best.

Where do we go from here?

How can we counter the destructive mythology of modern sexual culture and build something new, something inspiring? Can sex be a collaboration, rather than the battle of the sexes? If you haven’t read YesMeansYes: Visions of Female Sexual Power and A World Without Rape (and you should), you can find a longer excerpt from “Towards a Performance Model of Sex” online.

Why a performance model?

As Thomas Macaulay Millar points out in his incredibly essay, the benefits of performativity are numerous and life-changing. It is the act of treating sex as another, incredible act of artistic creation. Rather than the judgement and adversarial attitudes we might conjure up when we think about “sexual performance” the model is a concept of sex as a collaborative, creative effort between two or more people, of any gender, who are capable of each giving something to the experiences… and in which each gets something back.

The virtue of a performer is in their skills. Skills develop with practice. Instead of putting arbitrary value in something which happens only once and is forever lost, performativity values the hard work and pleasure that comes from enjoying something enough to learn to do it often and well.

Performative sex is never a zero-sum gain. Someone doesn’t have to lose for another person to win. What is valuable about sex as performance is the power it holds to benefit both parties. Pleasure and intimacy engaged in with enthusiastic consent is a win-win.

When enthusiastic consent is encouraged, when we learn not to assume yes or wait for a no, when we are comfortable talking about our desires before we jump head first into the beautiful mess, we shake the very foundation of rape culture. We tear it down, brick by brick.

How do you define virginity? What kind of sex “counts” as sex? Most importantly… why does it matter? In ancient times, the word “virgin” meant something entirely different. Virgins were named for the constellation Virgo, the word meaning “maiden, unwedded girl or woman” and associated with healing, sensitivity and passion. The goddess of love, Aphrodite, married and known for her many sexual escapades, is considered a Virgin Goddess.

Rather than marking her as inexperienced, the status of Virgin was one of a free woman, owned by no man, neither father nor husband, able to choose her lovers as she pleased and maintain her personal agency. Who better than the ancient, autonomous Virgin to herald a new age of sexual power, strength and collaboration?

Sacred prostitute, married pansexual, and pagan polyamorist, I have always had a deep desire to change the world through the spread of sexual empowerment and alternative loving. I am a passionate 28-year-old Canadian who offers a fresh, open and frank look at sexuality and gender, encouraging others to find and keep strong and happy loving relationships.