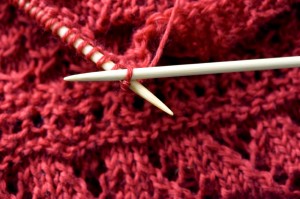 Knitting is as useful as a reminder that humbleness is as important as skill.

Last fall I decided to go on a meditation retreat.  I have some anxiety, and I have knit to calm my nerves, and took my knitting with me.  This seemed like a simple idea, I would have something to go do quietly, it wouldn’t draw attention to my quirks, and since I was starting on a really big project I thought it would be something productive I could for Sir while I was traveling.

My projects are both “assigned” to me and things that I am able to ask to do.  In most cases, though, my knitting is an assignment.

I was working on an afghan square when all the sudden one of the mediators started talking to me about why I was knitting.  I wasn’t aware that knitting would be such a hot topic although I do have to admit the plan has backfired on me more than once and I suddenly start picking up friends on the bus who also knit, who want to know what I’m knitting, and then continuously  interrupt my knitting- almost like the drunken monkeys in my head.  It certainly was a hot topic during introductions at my retreat. In fact a few knitting books focused on meditation and knitting were recommended.  Patterns and all there are groups of knitters who use it as meditation.

It was surprising how much attention I received from my knitting.  Normally Sir knows that I am knitting but it is “background noise” and is expected.  Not something I look to him as a cheerleader for.

At the time I thought my afghan project would be done in a month.  However life got in the way, things got moved around, I had a lot on my plate, and at the end of the day it did take me longer to do.  In fact I started motivating myself with discipline to do it.  Not because I was going to give up- believe me after knitting something for 3 months you really do want to see it out till the end-but because it seemed so tedious and a bigger project than I assumed it was that my interest begin dwindling and such as having a hard time finding my cushion I began having a hard time finding my needles.

But really any artistic craft is meditative.  Its releasing to paint, write poetry, rigger someone, be a rope bunny, let a “mean” sadist dude decorate your ass with bruises and welts, or work on a craft like knitting or crocheting that might take a while. It’s really what you give, selflessly, which is the main reason to look at it as a service.

For me… watching the stitches come together, watching something grow and on occasion get to wear it myself is somewhat of a treat and something that I am humbled by when I do receive permission. As I write this, near the Christmas holidays, this reminds me that it is the time of the year to also give and not just receive.  When something is handmade there is some form of feeling that goes into it.  As knitting is a part of what I do to keep calm, and stay away from anxiety, some of my knitting represents my creativity, other squares represent happiness, some represent frustration, and some even represent a struggle to stay afloat in my present world.

There is a saying in meditation: not to tight, not to loose.  It means that if you are round-up too tightly with meditation you will block out thoughts but if you are not disciplined at all then you will not really get the full effect out of meditation.  For knitting… if you hold your yarn too tightly it’s almost impossible to knit the next row… but if you hold it too loosely you get holes in your knitting that shouldn’t be there…

Tend to a project, spiritual or personal, like tending to submission or a plant.  You plant the seed, you water it, there is work involved, and then you start watching it grow. The more you care for it the better of the plant it will become rather than just some brown dead leaves sitting on a window sill.

In my case there is a moment of humbleness when I give away a knitted project.  I must admit I did get attached to the afghan despite my better judgment and reminding myself that in all actuality one of the key ideas about Buddhism is not to get attached to anything.  I am fortunate my attachment was not a strong feeling but the sense of humbleness of giving away something that I worked on, and has been a focus for weeks on end, is a reminder that slaves and submissives are still human and these things we do form their own spiritual artistic form.