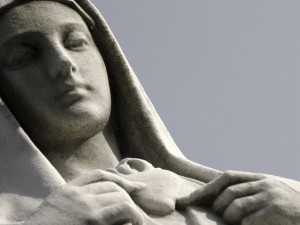 Recently I volunteered at my daughter’s Catholic nursery school and spent the day helping children and teachers with the day’s activities. My favorite time was sitting in a circle, listening to a story about hibernating bears and singing songs. There was a song that said “good morning” to God, and they genuflected before and after singing it. The teacher moved deliberately through the crossing motion, making certain that the children could follow, as did I. “In the name of the Father, Son and Holy Spirit. Amen.” At the very end I planted a kiss on the knuckle of my thumb as a small sign of honor to Mary, and I felt the gazes of several small people on me as they watched with curiosity.

The knuckle kiss was something I learned when I lived in South America where the veneration of Mary is more obvious than it is in the States. The motion is ingrained to the point where I do it instinctively and without much thought. I wasn’t about to go into an explanation at nursery school circle time, but it was a helpful reminder to me of one of my favorite aspects of worshiping as a Catholic—the Virgin Mary.

Acknowledgement of Mary in daily worship is part of what attracted me to Catholicism in the first place. Despite her crucial role in the Immaculate Conception and as the mother of God, not a lot is said about Mary in the Bible. I often wondered about that when I was growing up, struggling with my fears about fitting in and finding my way. Mary became pregnant somewhere between the ages of twelve and fourteen while she was still a virgin and engaged to be married. I tried to put myself in her place, imagining what it must have felt like to break this news to her betrothed. Not only was she pregnant without sex, she was impregnated by God. The idea blew my mind as a pre-adolescent, and it still blows my mind today.

The symbolism of Mary in Catholicism is obedience to God’s will. Despite her youth and inexperience, she accepted the mantel of birthing the Son of God. She also knew that His path as the Savior would lead Him on challenging and dangerous paths. As a mother, giving my own child the space to make her mistakes and forge her way can sometimes be in direct opposition to my fierce protectiveness of her. And I have a regular toddler. That sacrifice and the strength of Mary is what I admire. Her ability to give Jesus the support and love He needed even though she must have been frightened for Him. It’s what I think of when I recite the rosary or when I say, “hail Mary, full of grace.”

To me, Mary is also the feminine aspect of the divine. In the patriarchal religions that I have belonged to, I found that I needed a balance to the masculine words of worship. God is always referred to as “He.” However, I don’t believe that something as vast and mysterious as God is purely masculine in the way that human beings see such things. I ponder the many facets of the divine and how they manifest in my life. Showing my respect to Mary when I genuflect or pray feels like acknowledgement of the fullness of God and the corresponding spark of divine that dwells in our souls. I’m not just one thing. I am many, and I think this is a reflection of Mary and of God.