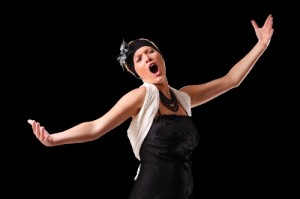 The opera opens with a farmhand, Nemerino (performed by Matthew Polenzani), singing of his unrequited love for the beautiful landowner, Adina (performed by Anna Netrebko). She knows about his feelings, but dismisses them, because all she knows of love is through the lens of her own experience – as she tells him, her feelings constantly change, they are fleeting and unstable. I think this makes her believe that his feelings are just as superficial and will, too, soon change. At first I read this interaction as Adina being uninterested in Nemerino, because she is a strong woman, free and used to being in charge. What she’s looking for in a mate is an even greater strength – Netrebko plays her role as a fun-loving brat, and a brat, in a simplified understanding of her motives, is really looking for someone to take her in hand and dominate her. At first glance, Sergeant Belcore marching into town with his troops might just be that person. Unlike Nemerino, he’s very straightforward in what he wants from Adina – here, the libretto is very frank and highlights Belcore’s extreme self-confidence, as he sings to her: “I see in your eyes that I have won your heart; no wonder, I am handsome and a sergeant, and there’s no girl who doesn’t fall for the uniform of a soldier” (“How modest!” Adina jokes with her friends). However, the staging of the opera sexualizes their interaction even further. Mariusz Kwiecien (singing for Belcore) comes at Netrebko with a sword, pointed at her like a phallus, and as he comes closer, he swoops behind her, making it seem like the phallus is going right through her. But Netrebko is not an easy prey – she comes back at him with a top hat and a riding crop – like a lion tamer, her show of dominance over his animalistic, but rather simple act of sexual aggression. Unlike Nemerino, Belcore puts up a good battle for Adina’s affection, but she doesn’t give in, asking for more time to make up her mind. The Sergeant is too simple of a Dom to truly win her heart, but he’s entertaining, and very forward in his pursuit. His explicit sexuality provides a fun and easy alternative to Nemerino’s implausible sobs and passive courtship. Since this is a romantic comedy, it’s rather easy to predict that despite all the interruptions, Adina will end up with Nemerino, however, the motivations and reasons that lead to the happy ending are not as straightforward.

“Chiedi all’aura lusinghiera” provides an interesting clue into Adina and Nemerino’s characters. On the surface, the purpose of this duet is for Adina to explain to Nemerino that her affection is fleeting, and that he’s better off without it, and for Nemerino to let her know that he will still be in love with her, no matter what. She sings: “Go ask a light breeze, why it leaves one flower for another; why it keeps wondering through storm and rain, over mountains and through shady groves? He will answer that it’s his nature which moves him to change.” In response, explaining why he can’t give up loving her, Nemerino sings: “Go ask the river, why it leaves its source and runs down the mountain and through the valley to the distant sea? It’ll say that some unknown power drives it on.” On one hand, their songs are very similar – both sing of their inability to change who they are, however, for Adina, that drive in internal – it’s her nature that keeps her moving from one object of affection to another, while for Nemerino it’s an outside force – an unknown power – that keeps him in love. In BDSM terms, I believe this makes him a submissive – one who desires to be overpowered and led, while Adina can only play to her own fiddle, and be driven by her own desires. And it is this distinction that validates, for me, this particular production of Elisir D’Amore, in which Adina remains a Domme, with her top hat and riding crop, and Nemerino finds success as her sub.

The libretto can really go either way, after all, as the opera progresses, its most beautiful and memorable aria, “Una furtiva lagrima,” is sung by Nemerino, which can be read as an indication of his growing strength and Adina’s subsequent submission. But that is not the way this production goes…. Matthew Polenzani  sings his aria beautifully, but the strength of his voice never matches Netrebko’s, and all his demeanor remains submissive to the end. What he wins Anna’s heart with is, in fact, this continuous and unrelenting submission, in the masochistic tradition of a knight valiant: first, spending all his money on a love potion sold by a very loveable charlatan Dr. Dulcamara, and then enrolling in the army for the money to pay for the second serving of the potion. The libretto allows us to see Adina as jealous of the sudden attention Nemerino receives from the town ladies when in a twist of fate he inherits his uncle’s fortune (which they know about and he doesn’t), and worried that she has lost his favor, when he pretends, drunk on the love potion which actually is nothing more than a bottle of Bordeaux, to scorn her. But the acting shows us a different dynamic – yes, Adina is jealous, but only because she realizes that she does love Nemerino, submissive as he is – especially when she finds out from Dr. Dulcamara the extent that Nemerino has gone to in order to win her affection – and decides to buy him back from the Sergeant. Ironically enough, while telling Dulcamara in a show of confidence and bravado that she doesn’t need a love potion to win Nemerino because she has something much more powerful – her eyes and her smile, it is not her charms that lead to her happy ending, but her act of taking charge of Nemerino’s life, when she buys back his military contract. And Nemerino, instead of being offended by her meddling, is genuinely moved by her care. Their power dynamic: her in charge and him willing to do anything to please her, remains unchanged, so it is not Nemerino’s emerging strength that brings them together. Instead, when Adina sees all of his acts of love for her, and how far he is willing to go, she pities him, but also realizes that true to his word, his love is here to stay. And it is this pity and Nemerino’s subsequent gratitude, I believe, that in the eyes of a submissive searching for a master could read as scorn, but in the eyes of a dominant brat become appreciation and love. For Netrebko’s Adina, her appreciation turns into desire. Again, the libretto could allow for Adina to submit to Nemerino, ala the “Taming of the Shrew,” but Netrebko remains visibly in charge of the relationship, literally dragging Polenzani into the tall grass and pulling him on top of her, in a textbook illustration of “topping from the bottom.” Netrebko plays a brat alright, but one who doesn’t need a man to take control, fully enjoying, instead, her dominant role.