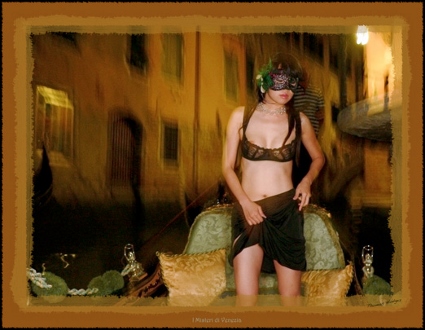 “I don’t as a rule especially set-out to juxtapose the two, it simply depends upon the nature and theme of the shoot and the story attached to it,” Hodges explained. “However, the series is a prime example of juxtaposing, primarily because the location and story-line dictates it.”

Eroticism and Italy, especially the sophisticated city of Venice, has had their own long history, he reminded me and ‘I Misteri di Venezia’ is, “intended to arouse those thoughts of past and present mysteries.” The best way to capture this essence was to contrast a lone female – in this case, his muse and wife – against the unique Venetian architecture.

Even if you’ve never spent any time in Venice – and my two day visit almost 20 years ago was far too short by any standard – it’s easy to sense it’s mysteries behind the light and blurred boundaries of Hodges series: Dimly lit alleyways, a lithe masked figure sauntering past, her upturned face and open mouth suggesting a prelude to something (a kiss?); her silhouetted and dancing form behind billowing curtains; the slightly whimsical scene of her lingerie-clad form reclined in a gondola. Blurred images that arouse imagination and, as Hodges hopes, “provoke the senses and let the viewer of the works deduct their own conclusions of what may or may not transpire.”

“My artistic style I have defined as “Imaginistic”, no matter what the nature of the subject matter.” Hodges works are at once symbolic, conceptual and representational, and draw from his interpretation of ‘Imaginism’ an art movement he established in 2006, “primarily to accommodate his own artistic style, and as a compliment to the poetic movement of the same name.”

The subtle eroticism of this series in particular invites repeat viewings, reflecting his predilection for creating images whose underlying meaning isn’t always apparent upon first glance. “I Misteri di Venezia’ is an arousal of the imagination” Hodges says. “The same can be said for many of my other works, juxtaposed or not, the intention is always the same, to entice the onlooker to deduct their own conclusion as to what the image portrays.”

Hodges, who travels extensively and has lived in many parts of the world, has received numerous awards and recognitions, and exhibited by private collectors and corporations, including Sony Corporation, Universal Corporation, Shanghai University and Chi Mei Museum.

He has and continues to exhibit his work internationally, including the 2009 Venice Biennale and the International Art Show in Cannes, France, and will travel to Japan and the United Arab Emirates this year for work. His many series can be viewed at www.photoconception.com

Tinamarie is a top-rated writer of sex, love and relationships, with a special emphasis on the soulful side of intimacy. From sacred and eco-sexuality, erotica and feminism, to advice for couples who want to deepen intimacy, Tinamarie's articles can be found at a variety of online resources, including Kink Academy, Sharewik.com, Examiner.com, and Greenprophet.com. She loves to discover new artists who's work highlights the beauty of the human form, and has interviewed such notables as Lori Gottlieb, Diana Kirschner, Jaiya, Mara Altman, and Rachel Kramer Bussel in the pursuit of knowledge about human sexuality.