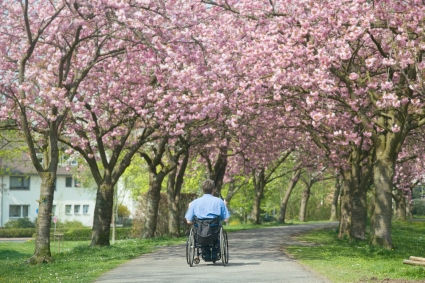 A woman’s friends are incredulously  disbelieving when she tells them that she and her husband, who uses a wheelchair and has several medical conditions, have an active sex life.

A young blind man, who has just realized he is gay, asks his trusted resource teacher to help him learn how he can join his high school’s LGBT GROUP.  His teacher tells him he is just looking for attention and refuses to help.

When people talk about sex and disability, the discussion inevitably turns to sex positions or modifying sex toys.  Necessary topics, yes, but these discussions don’t encompass the full range of considerations and biases that play into disabled people expressing and living their sexualities

People with disabilities are too often seen as childlike,, helpless, vulnerable, and sexless.  When a person with a disability does express her sexuality, she is seen as perverted or oversexed.  Partners of people with disabilities are pitied or admired for their caregiving.  When sex and disability is discussed in the media it is approached with a sense of wonder and amazement, a thoroughly disrespectful approach to something that is inherent in the experience of being human

Even seemingly positive assumptions about the sexuality of people with disabilities can be harmful. Outside the realm of sex, there is a general belief that if one part of the body  doesn’t work, other abilities are heightened. In sexual scenarios, a blind man, for example, might be seen as a better lover because he does everything by touch, or a paraplegic woman might be assumed to be extra good at oral sex.  These are misguided misconceptions, to be sure, but also troubling as they objectify both the person and the disability. Sex is in the brain, and our personhood is in the brain.  No one wants to be reduced to a body—a sexual vessel.

I could tell you more stories. Stories about the research with men who have spinal cord injuries, telling of how they find  that the most limiting things to their sexuality are not their injuries, but rather social prejudice and lack of practical help with things like getting to dates or buying safer sex supplies.  I could tell you about other research, showing that women with physical disabilities often have low sexual self-esteem and are at increased risk of intimate partner violence.  I could tell you about the statistics, statistics that barely scratch the surface of reality, showing that people with disabilities—both children and adults—are too many times more likely than their temporarily able-bodied counterparts to be sexually abused. I could tell you all about the harmful effects of the belief that people with disabilities don’t need sexuality education.

Sex and disability is said to matter because with people living longer these days, more of us are likely to experience illness and disability, whether temporary or permanent.  This is true, but it is also true that while more people are becoming disabled there has also been a social shift iin perspective towards, and social inclusion of,  people with disabilities.  Disabled people are a much more visible part of society than they were one hundred years ago—visible in work spaces, public venues, family activities… Yet somehow this restoration of humanity to people once considered subhuman doesn’t include the recognition of sexuality or amorous feelings.

The harmful beliefs about sex and disability harm all of us.  They revolve around the notion of “real sex”.  There are various versions of “real sex” but most of them end up with a man and a woman having penis-in-vagina intercourse.  Depending on the paradigm, they are happily married, or they hooked up after making steamy eye contact with each other at the singles bar.  I don’t know about you, but I am thinking about all the people this scenario excludes for reasons of gender, sexual orientation, physical ability, life circumstances or, let’s face it, personal preference.  Broadening the universal concept of sexuality can only help everyone.

Yes, there are differences. A blind man can’t glance across the room at the cocktail party and entice you with eye contact.  A woman who uses a wheelchair to get around may, depending on the nature of her disability, need help in and out of the chair, with changing positions, and so on.  A deaf person will likely want you to leave the lights on so he can read your lips, watch your body language, or do whatever he needs to do to communicate with you while you’re being sexual.

The choice to be sexual is the birthright of every single person.  Personhood doesn’t go away with the presence of illness or injury, so that choice remains.

It is up to all of us to create a sexuality-supportive society, one that facilitates instead of limiting, that honors individual choices and realities.

A Note On Language:  Among people with disabilities, there are many schools of thought with regards to language.  Some say that the person should always come first, before the identification of the disability—as in person with a disability or person who is deaf.  Some say that language choices are just splitting hairs and really don’t matter.  Others prefer, for a variety of reasons, to state the disability first—as in disabled person or deaf person.  I have chosen to use a mix of language based on grammatical sense.  My language choices are not consciously political.

One Response to “Why Talk About Sex And Disability?”