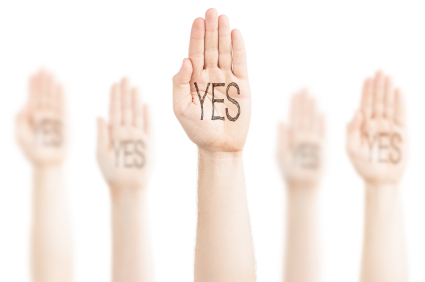 The issue of consent has been growing both within and without the kink community in the past few years. Recently the National Coalition of Sexual Freedom began their “Consent Counts” campaign, endeavoring to teach local law enforcement officials the difference between assault and kink.

The difference, of course, is the consent of the individuals involved. It’s understandable that police might have trouble understanding this, however, because even within the kink community there are questions and concerns about consent.

One view is the idea of “explicit consent”, where everything that happens in a scene has to be thoroughly and clearly negotiated before a scene can happen. Also known as the “yes means yes” style of negotiation, it is an exclusive form of play: everything that lies outside what was explicitly agreed upon in the negotiation is forbidden. At the same time, consent can be revoked at any time during the scene, for any reason.

However, in an explicit consent agreement that is only for things you decide you don’t want to do. If the bottom or top tries to expand the range of play, re-negotiating in the midst of scene, that is considered to be a violation of the consent, even if it was entirely the bottom’s idea. The power disparity between top and bottom creates too much possibility of bad decisions due to being in an altered state in the heat of the moment – basically the equivalent of “thinking with your dick” though it’s not gender-specific.

There have been incidents where tops have acquiesced to a bottom’s request to “take things a little further”, and afterwards had the bottom accuse them of violating consent. The perception is that the top, being in control, has a responsibility to “hold the line” of pre-negotiated limits, and failure to do so is almost criminal.

It also reduces the level of communication to one simple message: the bottom’s ability to say “no” at any time. As kink educator Sheryn B. writes in her essay “Assent Matters”(you must have a Fetlife account to view link).

If you sell the notion that bottoming takes everybody to a place where consent is impossible…then ALL the work being done to make what we do legal and defensible and give us CHOICE is for naught. If we aren’t competent to consent or withdraw consent once play starts, then everything we do will always be criminal, for our own protection.

While it might be nice to imagine a world where everyone has the complete ability to explicitly state exactly what they want (and their partners have the ability to deliver it) that is the realm of a privileged few. At a certain point in order for people to grow sexually they have to step into at least some level of the “unknown.”

That’s where “Fuzzy Consent” comes in.

Explicit consent certainly has it’s place, especially when a couple of people are first starting to play. It can provide a clear map of where the players want to go: rope on, suspension in the air, back to ground, rope off. Clear, easy to understand. Sexual contact can be absolutely dictated, clearly outlined (“Touch me anywhere my underwear doesn’t cover” is a common one).

Fuzzy consent, however, gives both parties a playground and an invitation to play within the boundaries. It’s not a map, it’s a jungle gym, and just like kids it is a chance to share and inspire each other’s imagination. You can try things out and give feedback. You both have the opportunity to try something and say “Ooh, I like that…let’s try more!”

There’s a reason that they call it “play”, after all. There’s no reason that explicit consent can’t be the start of a conversation rather than the end of one.

Gray is the sole proprietor of satorimedia LLC, a multimedia company formed in 1998. He has published two books and is working on a third, with numerous articles and short stories in other publications. He is also the founder of Graydancer's Unconference Extravaganza (GrUE) which is poised to invade Europe late in 2011. Gray is both faculty and staff at the Kink Academy and Passionate U, and has worked as a professional rigger and model for sites such as Kink.com, the Twisted Factory, and Beauties in Bondage.