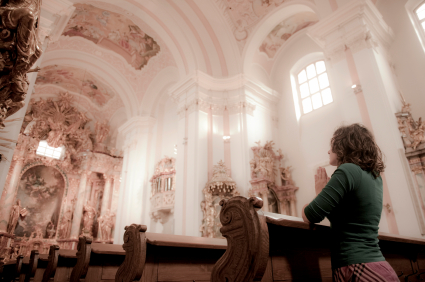 The Trinity – the doctrine or teaching that God is Father/Creator, Son/Redeemer, and Holy Spirit/Sanctifier – is central to Catholicism. But no one fully understands the Trinity. That is why so few people ever talk about the Trinity; the focus is usually on one or another Person of the Trinity (the Father, or Jesus, or the Holy Spirit), rather than God as Triune (three in one). Any discussion on the Trinity, therefore, must first acknowledge how little we know about it. God is ultimately Mystery. (Humans, made in God’s image, are too.) Let’s plunge ourselves into the depths of the Mystery rather than just dismissing or avoiding it.

Sexuality – especially kinky sexuality – is also quite difficult to comprehend fully. We may or may not know much about the complex origins of these desires and the winding roads of their development, but most will agree that there is a fair bit of mystery in it all. Again, let’s enter into that mystery rather than avoiding the complexities of kink or dismissing such sexuality as weird or (negatively) perverse.

Belief in the Trinity is really a belief that God is relationship: “God is love” (1 John 4:8b, the first letter of John, chapter 4, second part of verse 8 in the Christian Scriptures, or New Testament). “God is love” language is thrown around all the time, usually in too superficial a way, in my opinion. But there are deeply meaningful ways to understand God as love. The Christian Scriptures were written in Greek; the Greek word for love as it describes God is agape, which is often defined as an unconditional or universal love. There is truth in these definitions, but the best definition that I have ever read of agape is “pure self-gift” (thanks to theologian Michael J. Himes, Doing the Truth in Love: Conversations about God, Relationships, and Service, pp. 9-22). God is pure self-gift. God is a relationship of complete self-giving.

The Trinity is fundamentally a relationship wherein all its members offer themselves to each other for the sake of the others – and all creation, for that matter. The same holds true in many kinky relationships wherein the partners offer themselves to each other so that each person (and possibly others) can live as authentically and as best as they can. God is complete self-gift; kinky partners can be too.