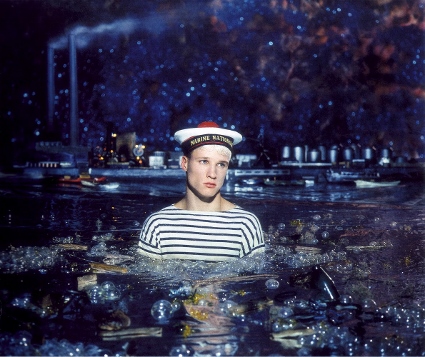 Pierre Commoy and Gilles Blanchad are partners in love and in art. But for these two men, art and love might be the same thing. The duo, who go by the moniker Pierre et Gilles, have been together since the mid-1970s and have created art as a team ever since. Looking at their work is like falling in love…or lust, for the first time. The photographs they create seem almost too good to be true: a world of fantasy and desire, a beautiful world for us all to visit and inhabit. Of course, the catch is that these photos are not true. Pierre Commoy is a photographer and Gilles Blanchard is a painter. Together, they create one-of-a-kind photographs that capture fantasy, camp, sensuality and desire.

Fiercely dedicated to their aesthetic, the two men make most of the sets and costumes for their richly colorful works. Once a photo is developed and printed,

Gilles Blanchard paints directly onto the photographs, making the work truly luminous. These pieces don’t just glow, they sparkle. The artists are in complete control of their works. Every bubble, tear, or drop of sweat is intentional and more often than not, created with a paintbrush. Step away from the photo, and it is hard to see where the photograph ends and the fantasies (or painted elements) begin. The point is that it doesn’t matter.

Just because this work is beautiful, doesn’t mean that the artists do not critique their subjects. This is especially true of their religious themed pieces. In these works, they queer and eroticize familiar religious figures—St. Sebastian, Jesus, Krishna, Eve—turning them to the realm of extreme artifice; a dream of religion, a fantasy beyond godliness.

It is difficult to be cynical when looking at the work of Pierre et Gilles. It is easy to be curious. It is almost impossible not to be seduced. Give in.

Sorry, the comment form is closed at this time.