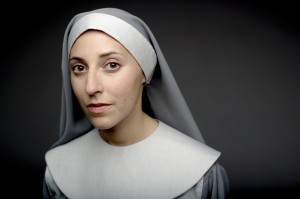 Your Book “In the Name of God, Why?  Ex-Catholic Nuns Speak Out about Sexual Repression, Abuse & Ultimate Liberation” tackles a taboo topic, what inspired to you to collect these stories and share them with the public?

Originally my book was my dissertation, written as part of the requirement for my Ph.D.  It was modified to make it more accessible to the general public.  I chose the topic – or rather – my topic chose me because, as I studied human sexuality in all it’s depths, I realized how religious life had impacted my own personal sexual development  and had in many ways stunted any healthy expression or ownership of it.  Over the past 14 years I have struggled with my fear of the church leaders and therefore did not do my best to promote these women’s stories.  However, the time is right NOW to speak out and speak up against the penis’s up to the Pope who are doing their damnedest to silence women of the Church.  The Inquisition is alive and well and I have to get over myself and my fears and represent women of all repressive religions to understand and honor their sexual selves.

In this day and age, nuns seem rather few and far between in the mainstream world. How has “being a nun” changed over the decades?

Over the past four decades nuns have been under a lot of pressure to stem the tide of change.  Radical nuns have been working hard to remain relevant in the world as teachers, social workers and nurses as has always been their traditional roles.

As was seen as recently as Aug. 11, 2012, American nuns in the Leadership Conference of Women Religious met to prepare a response to a three-year Vatican inquiry criticizing them for their liberal stances on homosexuality, contraception as well as an accusation of failing to promote the Church’s view of sexuality.  While the Church looks to “reform” the religious women, the LCWR is requesting to have a voice in the organization—a female voice.

At the same time Oprah did a show last year on nuns and their religious life and we saw young and old women dressed in completely traditional habits living the exact way nuns had 100 years ago!

The Second Vatican Council of 1962 had one main message; that was “change or shut your doors,” it was to force personal responsibility on religious men and women and to change monastic practices centuries out of date.

So, in answer to your question I think the past forty years has done much to force nuns back in time, back under heavy veils and into muted “Brides of Christ,” in direct opposition to the ideals of the the revolutionary Pope John XX111 who originally called for change.The current Pope and hierarchy of the church are conducting another Inquisition to silence women and it’s a practice they are used to winning.

Many of the stories are rather heart-breaking, what are you hoping readers get out of reading these stories?

These stories are simply representative of a group of women who all shared common denominators – they were all raised in catholic families, educated in catholic schools, entered religious life and then left.  I hope other women and men will appreciate the journey all of these women took and the incredible strength they demonstrated by ultimately discovering their own power in opposition to the Church which sought to control them.  Not all of them were successful but for those still alive I am sure the struggle continues because they were all incredibly intelligent and curious.

Organized religion, and Catholicism in general has been re-evaluated by many previously faithful church members, what do you think about this shift of perception?

I think there is much confusion as the church struggles to contain it’s general degradation, put out fires of it’s own making and refocus the world on matters much more easily controlled…women.

Do you think there are any positive aspects to being part of the Catholic church, whether as a nun, a priest or a congregation member?

As the hierarchy stands today I would question the sanity of any woman willingly walking in it’s doors.  As I reflect on my innocent/ignorant view from my own childhood and youth I can see the glorious nature and goodness of those dedicated men and women working within the church for the betterment of society.  In my view, these men and women would be good and saintly people with or without the organization known as the Catholic Church and would maybe be much happier enjoying the freedom to truly choose and honor their sexuality in all it’s spiritual fullness.  Waiting another century for change is just plain sad!

This is a rather ground-breaking book, shedding light on a subject that the Catholic church seems intent on keeping in the dark….female sexuality.

Thank you; probably the very reason men and women of all traditional religions need to read it.

How do you think Catholicism affects woman’s relationship to their sexual selves?

It teaches girls to hide themselves, to see their bodies as dangerous.  It teaches women to mistrust their own nature and always be afraid – be terribly afraid.  Women can never be in control of their own sexuality.  Virginity is the “gift” we give our husbands and children are the reward for subjecting ourselves to sex.

I’m not saying women believe this nonsense, but it is the intended message from the Penis’s up to the Pope.

What has been the response to the book? Have you had any issues with the church trying to silence your writings?

The response has been mainly positive.  I have not had any reaction from the Penis’s up to and including the Pope…YET!

If you had to give one piece of advice to someone considering becoming a nun, what would it be?

Of course my first reaction is “DON’T”

Only the Catholic Church cull young boys at age eleven and segregate them from girls and recruit young women at age sixteen and brain wash them in “Formation” to control their every thought and deed.  Of course girls and women who make this choice do so from the fullness of desire to devote one’s life, soul and spirit to their own personal definition of God.  Conversely, young boys were placed in seminaries for a great education.  I understand the desire.

I would counsel them to wait, to grow up, to be sexual, to live a year of life outside the box of childhood laws and church Rules.  Then they know what they are giving up and do so with full knowledge not innocent ignorance.

I do want to acknowledge the fact that we have always had pure ascetics walking with us. Men and women dedicating themselves to God in all walks of life.  The organization which is the Catholic Church seeks to form young boys and girls and shape them to suit the needs of the organization that’s very different and something I strongly object to.

You can purchase “In the Name of God, Why?  Ex-Catholic Nuns Speak Out about Sexual Repression, Abuse & Ultimate Liberation” here.

One Response to “Interview with Fran Fisher RN, Ph.D author of “In the Name of God, Why?””