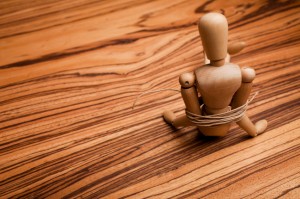 A central concept in Taoism is that of p’u, the uncarved block. When a woodcarver looks at such a block, he can see within its simple material the potential to be many things. He can shape it into a knife, a spoon, a spear, a bowl, even a paddle. By his choice, action, and skill the carver can dictate what he thinks the wood should become. This is an immense power. It is also a source of great trouble.

In the degradation of the great way

With the exaltation of learning and prudence

is full of dutiful children and parents.

is full of loyal patriots.

Just like the carver and his block, we use our own opinions, our own judgment to shape the world as we see fit, sometimes unwittingly. Lao-tzu had many examples where exercising judgment led to discord.

You don’t have to look farther than a political discussion to see the strife between liberals and conservatives, each convinced that their way is the right way.

Every family has its power struggles and issues, black sheep, controlling parents, and family mores.

Learning and wisdom come from many sources. Some of the smartest, most capable people I know never went to college. Yet our society regularly condemns those who don’t follow the typical educational path.

Kink is no stranger to this sort of discord, either. SSC or RACK? Old guard or new wave? Bedroom or lifestyle? Sexual or sensual?

We endlessly segregate ourselves into camps, packs, factions, and movements. In a world already primed to see us as the “other”, we yet further subdivide and judge. Just ask a babyfur about this phenomenon sometime.

At the very heart of the matter is the fundamental issue. We define goodness, morality, right action, for ourselves, and others, too. We carve our own block, and everyone else’s at the same time.

Taoism doesn’t have sin per se. There are no commandments, only observations about the nature of humanity, and of nature itself. The Tao te Ching is filled with countless examples of behaviors, actions, and movements as observed in nature. The patterns of nature are observed, not judged.

Judgment separates you from reality. When you concern yourself with how or what you, or any one, or any thing else SHOULD be, you don’t fully see them for who and what they ARE. This practice is called mindfulness, or being fully present in the moment.

Lao-tzu had much to say about the good that arises from it.

it’ll be a hundred times better for everyone.

people will remember what family feeling is.

there won’t be any thieves and robbers.

But even these three rules

what works reliably is

to know the raw silk,

When everyone is unconcerned with the correct way to be holy, to act properly, they treat one another more kindly. In a family that does not judge, love and familial bonds grow. If profit isn’t one’s motive, then the incentive to theft is reduced.

But these aren’t rules, or even instruction, they’re observations.

How you put aside judgment is to see things for who and what they are. See the simplicity of a raw silk cloth; hold an uncarved block of wood in your hand. Don’t value them for what they may become, but for what they are now.

This can be with just about anything: other people, events, relationships, groups, and even how you perceive yourself.

It’s so tempting to think that some change in yourself, someone else, or some situation, will provide you with the happiness you seek.

This is why all these endless arguments of position, definition, and identity have persisted, and continue to do so, among kink communities.

But it’s an illusion. The truth is that we require a lot less than we think we do, and when we let go of those things we think we so desperately need, we find peace.

There is nothing wrong with identifying with a particular school of thought, or tradition, if it appeals to you. But it’s not the arbitrary structure of being old guard, or SSC, or bedroom-only, or Gorean, or anything that brings one peace.

What would we be, to be happy, we ask. Stop asking. Wood, you be.