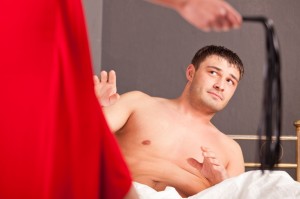 If someone wants to be beaten and is beaten, are they really being beaten? Of course they are!

If someone wants to be tied up and is tied up, are they really being tied up? Of course they are!

If someone wants to be forced and is forced, are they really being forced? Of course they are! Usually. It depends.

Sure, this point can seem a bit paradoxical. One example of when I see this question come up is when a sub expresses an interest in forced bisexuality. The argument against the forced scenario is that it is not forced because he wants it and in reality he must be repressing his sexual urges. And often the person presenting this argument goes on to point out that there is no physical force involved—that the absence of physical force further undermines the claim of being forced.

First, I forcefully refute the latter point and invite you to consider what it is to be forced. For our purposes, to be forced means to be ordered and does not require physical compulsion or for someone to Leah hand on you.

After all, imagine that a friend tells you that a Trooper forced him to back his car over his radar detector. Who here gets an image of a trooper pointing a gun at your friend, saying, “So, punk, are you going to back your car over that radar detector or do I need to arrange some ventilation for your brain?”

What happens if your friend recalls the occasion when a principal forced him to spit his gum out? Who here imagines a principal tackling and getting your friend in a headlock saying, “Spit it out or I squeeze harder! I said spit it out!”

So if a sub is being ordered to do something by someone of greater authority, which is the objective and a norm of sorts in D/s situations, it is colloquially reasonable to say he is being forced. You can use the word ordered or compelled if you like. But let’s move on to the bigger point of whether the scenario is forced for this point about terminology is just some light Saber rattling.

How can it be forced if he wants it? Isn’t he just shifting the responsibility for some taboo onto someone else? There is some basis to this argument but I am only Luke warm to it.

Wanting to do something and being forced to do something are not mutually exclusive. Imagine someone who wants to quit smoking but cannot do it on his own. Imagine that he wants someone to force him to quit. So even if the submissive wants it, it can be forced if it is something he struggles to do on his own due to inner conflict.

And sometimes the submissive does not want the activity in the least but simply likes the idea of being forced. For example, suppose a sub likes to be forced to lick a toilet.

If we say an act of submission is not really submission if the submissive wants to do it then that argument leads to the claim that one cannot really get submission from submissives and this argument implodes. Or explodes. Perhaps both.

Now, if the situation is one where a submissive is directing the show then the matter becomes a bit Chewy. For example, imagine a sub ordering a dominant how to dominate.

“No, no, not like that you idiot! Do it harder! Make it hurt good and force me!”

I am not sure if he is being forced. I am more sure that he will soon be without a partner and is going to be left to play with his hands solo.