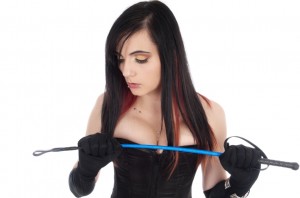 In Rhode Island, by an oversight of the criminal code indoor prostitution was legal until just recently;  in Reno Nevada it’s still legal. Next door in California, anyone convicted of prostuitution could face up to one year in prison and $1,000 fine.  Las Vegas and Atlantic City used to be the only places you could gamble in the United States.  In Colorado and Washington State, recreational marijuana is now legal, whereas in nearby Idaho, you can do up to 1 year for possession of any amount of Marijuana.    The point is, while the feds are slowly getting into the game, the majority of vice crime – drugs, gambling, and yes, sex, are regulated and prosecuted at the state level.

What does this mean for an aspiring professional dom?  It means you need to know the laws where you intend to work.  In some states, working as a professional dominatrix, even if there is no sex, can leave you vulnerable to charges of prostitution, whereas in some states, fee-for-service sado-masochism is explicitly excluded from prostitution.   Let’s compare the laws of Massachusetts with New York.   In Massachusetts, the prostitution statute, MGL 272 S. 53A, begins “Whoever engages, agrees to engage or offers to engage in sexual conduct with another person in return for a fee…”  The statute doesn’t define “sexual conduct,” however in a case,  Com. v. Lavigne (1997) 676 N.E.2d 1170, the court wrote that in deciding whether or not something was “sexual conduct,” a judge could look at the “entire circumstances..apply common understanding…and could draw inferences and conclusions based on common sense and life experience.”  In other words, the judge can just.. kinda… decide.  Of course, in deciding, the judge looks at the definition of “sexual conduct” in other Massachusetts laws, like in the obscenity statute, where the definition includes “flagellation or torture in the context of a sexual relationship” (MGL 272 S. 31).  In other words, in Massachusetts, working as a professional dom does leave you vulnerable to laws against prostitution.

So what about New York?  In New York, just like in Massachusetts, a person is guilty of prostitution if that person “engages or agrees or offers to engage in sexual conduct with another person in return for a fee.”  NY Penal Law 230.00.  Similar to Massachusetts, “Sexual Conduct” is not defined for this particular statute – and so in deciding whether or not something is “Sexual Conduct,” a court would look to case law.  However in New York, there’s a nifty case, State v. Georgia A., 621 N.Y.S. 2d 779 (1994) which held explicitly that “sado-masochistic acts such as foot licking, spanking, domination and submission do not appear to fit within category of “sexual conduct” referred to in prostitution statute.”  So if you’re in New York, working as a professional dom does not necessarily leave you vulnerable to laws against prostitution.  Go New York!

The problem is that most states do not have cases like Georgia A.  And many states seem to give courts freedom to define “sexual activity” as they will. The upshot of this is that if you’re working as a professional dom, you really should investigate the laws in your area – ask others working in the area, do a bit of research yourself – heck, even contact your local librarian (try: sexlawlibrarian@gmail.com, for example).  Have a contingency plan – a “what if…” – in other words, have – or at least know of an attorney you could contact if you need to.  Need a list?  Yet another plug for the National Coalition for Sexual Freedom and the lawyers section of their Kink Aware Professional s directory.   But again, ask around – others working in your area (by which I mean jurisdiction, your state, not just others doing what you’re doing).  The worst-case-scenario, the “What if…” is never a good dream – but knowing the law & having somewhere to turn, can keep it from being a nightmare.