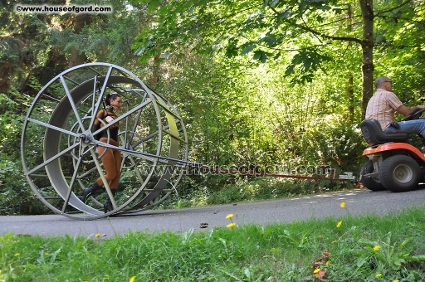 “On the evening of September 3rd, 2013 we lost a master, a hero, and a true artist in every sense of the word. His lover Femcar was with him till the very end, although not by his side. She was in her proper place, on her knees naked, below his desk.”

These words shocked the world of kink and fetish. The word “pioneer” is possibly inadequate to describe the effect Jeff Gord and his inventions have had on thousands of kinksters all over the world. Just as John Willie and Bob Stanton inspired fantasies of bound women in fantastic devices, Mr. Gord brought those devices – and much more – to life through his self-described “bent” art.

According to Mr. Gord, his desire to create his fantastic devices came very early in life, when as a child he watched a woman in tight lycra doing a stage show. He was entranced by her ass, and got rather annoyed every time she faced the audience. It occurred to him that if she was tied up, she couldn’t turn around.

He continued to be inspired by the works of artists such as Willie and Stanton into adulthood, when he became an electrical engineer by trade. The “House of Gord” actually started in a pigsty near Mr. Gord’s home back in 1970, and he commented once that the pages of his magazine “smelled a bit funny.” The magazine – later becoming a website – showed Mr. Gord’s devices combined with models towards one specific purpose: “I have always loved the thought of using women as items of furniture, especially if it makes escape or movement impossible. I guess it is the thought of having such a powerful sexual being totally under control…fortunately a lot of ladies also enjoy this concept from the other side of the equation.”

While these might seem extreme, Jeff Gord was always concerned with the woman first. “It takes a lot of thought to make sure each one is safe, and yet looks aesthetic…I like them to look precarious, almost unsafe or not strong enough, even though they are often strong enough to lift the truck with.” Aside from safety, he also did his work out of a desire to share pleasure with the women in his devices. “If the women don’t enjoy it, it’s no good to me,” he told Princess Anne of Stripped-Down TV at his exhibition at the Erotic Heritage Museum in Vegas.

“He burst through our world, larger than life, lived and died on his own terms. He will truly be missed, and his art will live on forever.”

Gray is the sole proprietor of satorimedia LLC, a multimedia company formed in 1998. He has published two books and is working on a third, with numerous articles and short stories in other publications. He is also the founder of Graydancer's Unconference Extravaganza (GrUE) which is poised to invade Europe late in 2011. Gray is both faculty and staff at the Kink Academy and Passionate U, and has worked as a professional rigger and model for sites such as Kink.com, the Twisted Factory, and Beauties in Bondage.