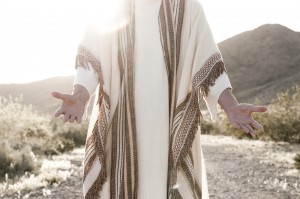 Conservative Christians would have you believe that the founder of their faith demanded sexual purity – no nookie before marriage, not much after, and all restricted to heterosexual intercourse.  As one talk-show host summed it up: “Sex is so dirty, you should save it for the one you love.”

Well, guess what?  Jesus didn’t have much to say about sex, and what he did say and do was nothing as prudish as fundamentalists would have you believe.  In fact, he was not only radically inclusive, but he more often condemned the hypocrisy and narrow-minded attitudes of the religious authorities of his day.  That shouldn’t be all that surprising, given that those same Sadducees and Pharisees often criticized him for “consorting with prostitutes.”

Jesus frequently flaunted and questioned the taboos of his age.  At a time when men and women were strictly segregated, he spoke with a Samaritan woman. He even mentioned how she had cohabited with a string of men, yet shared his message with her.  Shameful!

Often I’ve heard progressive preachers begin a sermon with “what Jesus said about homosexuality” – and then stand back in silence.  Well, a more careful reading shows that Jesus did say a thing or two on the subject.  First, when he talked to his disciples about eunuchs, he divided them into three groups: those who were made eunuchs by others, those who made themselves eunuchs “for the sake of the Kingdom of God,” and those who were “born eunuchs.”  Yes, born.  You see, eunuch weren’t always castrated. Many simply had no attraction to women, which meant a good number were likely gay.  They were not just harem-keepers, but trusted advisers to royalty.  The fact that Jesus recognized this shows how much ahead of his time he was – and he knew it, having told his disciples that “not everyone is ready to receive this teaching.”

Then there’s the centurion and his servant …

“Wait a minute!” you’re saying.  “No way you could tell that a Roman soldier stationed in Judea was schtupping his slave!”  Actually, there is.  You see, in the extant Greek of Matthew’s version, the centurion doesn’t call the servant his duolos, but his pais.  In the context of that time and place, that meant a young man obtained to be his master’s lover.  Even more telling is how Jesus reacted on hearing this.  He didn’t condemn the man, or ask any questions – he simply agreed to go and heal the boy.  Then the centurion says he’s not worthy to have JC in his house, but believes he can do the miracle right there and then – and Jesus praises this gay soldier for his faith.

With all of that, imagine what kind of church Jesus would start if he was here today.  He’d welcome gays and lesbians, crossdressers and kinksters, singles and couples and polyamorous clusters.  He’d certainly condemn dishonesty, exploitation and abuse, but so long as there’s love, consent and concern for well-being, all would be welcome at his table.  Even if you did go astray, his message was – and is – to forgive rather than throw stones.