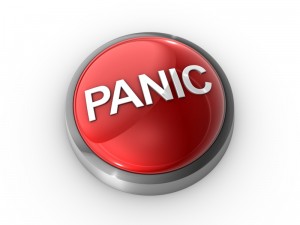 You’ve probably all heard that there’s nothing to fear but fear itself.  If you’re anything like me, you probably always wondered what the fuck that even meant and why everybody always said it to you when you were scared of something (I personally told all said people to fuck off and fear my wrath if anything!).  Having been pushed so far in my own sexual limits, I’ve come to realize that fear can be quite the kinky motivator when it comes to individual sex-ploration.

Fear is a primary emotion in place to let our bodies know that there is danger and possible death around the corner, which further triggers us to react in a fight, flight, or freeze response.  It’s no question that fear can often be the reason people become stagnant and complacent (or even more so bored) in their sex lives.  Fighting is a struggle, fleeing is cowardice, and freezing is manageable.  Finding amazing sexual chemistry with someone is enough of a feat without having to wonder what more you can try out or if they’d be willing to do this seemingly awkward thing in bed.  Before you know it, they seem completely uninterested while you go jerk off in shame to thoughts of dominatrix midgets with unshaven muffs.  I think it’s safe to say that we’ve all been there (not the hairy-midgets fetish part).

In my training as a Marriage and Family Therapist, I’d come to realize that everybody has pronounced fears when it comes to exposing vulnerable parts of themselves to a loved one…or to anyone for that matter.  It can be damaging, painful, and fuck, pretty scary considering rejection by somebody at a vulnerable exposing of oneself is NOT FUN, especially when you’re naked!  And yet, imagine the possibilities when that fear gets faced.

You’ve all heard stories about the mother that summoned superhuman strength to lift a car off her baby or the man who wrestled and fought a bear while fighting for his life!  When it comes to sex, how can we really know what we want (or who we can actually become) unless we plunge ourselves past our fears?

I’d still be a subservient anally restricted sex mouse if not for facing and fighting my fears.

Of course, this shit is much easier said than done.  It’s easy to say, “Yeah don’t worry about it just do it!” or “Hey, don’t knock it til ya try it!” but our fears are there for a reason.  So whether it’s nipple clamps, circus costumes, or hairy midgets, if there comes a time when “freeze” is not an option, I challenge you to fight.

Sorry, the comment form is closed at this time.

After having been born and raised on Catholicism, neuroticism, and Filipino food, JJ recently moved from the cultural confines of... Read full bio