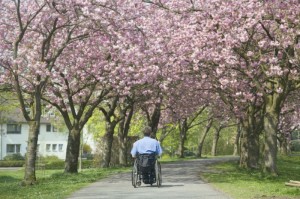 Perhaps the most prevailing trope, the belief to trump all beliefs, about people with disabilities and sex is that we have more important things to worry about, more important things to focus on, than being sexual.  Sex permeates our culture, affecting everything from hemlines on skirts to the way cars are advertised, yet for people with disabilities, and other marginalized groups, sex is considered a luxury we can ill afford.  How is it that sex is so ingrained as something normal and natural—for those on the more conservative side of the spectrum as a way to connect in holy matrimony and create children, for those more radical on the curve as a form of self-expression—yet it’s seen as something whole groups of people just shouldn’t worry their pretty little heads about?

This belief isn’t just held by non-disabled people.  Over the years, disability rights activists have balked at the idea that we should discuss sex and relationships as areas requiring advocacy, citing large-scale issues such as job discrimination and access to public buildings and events.  These are important things, to be sure.  I’m young enough that I only encountered a few elevators which didn’t have Braille on the buttons (though every once in a while I do still find an elevator that is not ADA-compliant) and I’ve heard plenty of stories from other blind people about riding up and down in elevators, trying to locate the lobby so they could just get out of the darn building.

How did I get from sex to elevators?  Oh yes, this idea that sexual rights aren’t important, that they will divide the disability rights movement and dilute it’s message.

Let’s look at what sex actually means, beyond yummy interludes with self or partner(s), and without judgement of one’s rights to enjoy those yummy times, either alone or with appropriate supports.  Sex means access to appropriate sexual health care.  Sex means freedom from sexually-based abuse and harassment.  Sex means education about our bodies and what they do.  Sex means appropriate support and treatment should sexual abuse have occurred—and we know from statistics, which only tell us part of the story, that people with disabilities are more likely to have experienced sexual abuse in our lifetimes than our non-disabled counterparts.  Sex means that something intrinsic to our lives and bodies—and this is true even if we should choose not to be sexual—is not ignored.

It’s a fallacy to imply that sex and relationships are not connected to the larger picture of rights and equality.  Sex and relationships, for people in general and people with disabilities in particular, are connected with health, with living arrangements, with how we interact with the world at large.  A small qualitative study conducted by health care researchers found that the low sexual self-esteem of women with disabilities placed them at increased risk of intimate partner violence.*  Tell me that isn’t an important issue.

I have created  list of things that aren’t very important.  Well, actually, I think they are, and I suspect you’ll agree.  This list highlights, I hope, the simultaneous individuality and universality of the ways in which sex plays out in our lives….

There are more important things—when medical people take you apart and put you back together again, but you don’t even know how to relate to your own body.

There are more important things—when emotions are given little weight in favour of physical priorities, and one’s psyche begins to crack under the weight of emotional abuse, or even emotional desires.

There are more important things—when sex may be the one thing you have to look forward to in a week, the one time your body becomes about something more than shampooing your hair and getting those Medicaid forms signed.

There are more important things—when people don’t give you internal pelvic exams because it’s too difficult, and you end up with cervical cancer, or maybe just the pain of a yeast infection left too long untreated.

There are more important things—When there’s no place on the medical forms for you to indicate that your same-sex partner is your next of kin and will be your point person while you’re hospitalized.

There are more important things—when your attendant isn’t legally allowed to shave your vulva, so your mother shaves it for you, and shames you for wanting it shaved.

There are more important things—when you’ve dressed up, gone to the bar to mingle, and people just want to talk to you about their Grandma who had macular degeneration, or so-and-so who trained guide dog puppies.

There are more important things—when just as many people have abused you as have loved you.

There are more important things—when other people get to experience pleasure, but your role in life is to give others pleasure by making them feel better about themselves.

There are more important things in life—when you’re more aware of your own body than most people, and just think what you could do with a little sexual knowledge and a sexual partner or surrogate.