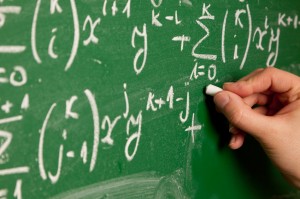 Polyamory and poly relationships are complex. Which is no surprise if you know anything about or have any experience with polyamory. But for people new to poly, managing poly relationships is an exercise in higher math that they might not be aware of.

Let’s take a simple example, and one common to the kink world. A triad, consisting of one dom, two subs, in a V-relationship, meaning the two subs are not sexually or romantically involved. The dom is married to one of the subs, the other is collared. We’ll say they live together.

How many relationships are there?

You might at first think two; one along each leg of the V. But that would ignore the fact that the two subs, despite not sleeping with each other, clearly have some kind of relationship if they are living together. So the answer is three.

But that is also too simple. Because all three of them form a family dynamic that is not merely the sum of their individual relationships. Undoubtedly they all behave differently when in a group together than when they are all separate.

So the correct answer is four. We’ve got one romantic/sexual relationship along each leg of the V, some sort of relationship between the two subs, and a group relationship amongst the three members of the triad. Each separate relationship has its own history, development, communication style, vocabulary (pet names, for example) and shared interests.

Now, make it more complex. Again, we’ll make it as simple as possible. Two couples, all sexually and/or romantically involved with each other. They live together in a multi-family home that one couple owns and the other rents part of.

If you said eleven, you are correct. Can’t picture it? Get a piece of paper, and make four dots in a square shape. Draw lines between each dot, including the diagonals. That makes six individual relationships. There are also four different triangles, four different ways the various members of the quad can combine in a triad. Count the quad as a whole, and you get to eleven. And because a lot of poly people are geeky and obsessive, someone figure out a handy-dandy formula to make it easy.

Rather than try to explain it myself, go check out the poly formula. Don’t worry, I didn’t follow all of the complicated math, either. But luckily, the formula simplifies to an easy algebra equation: 2^n-n-1, where n >= 2.

To make easier to see, here’s a visual:

The formula only counts links between the members. It doesn’t take into account what kind of relationships they have, who is sleeping or not sleeping with who, who’s mad at each other, what legal ties the various individuals have, how finances are co-mingled (or even if they are), dependents, etc. What the formula does do is make it abundantly clear just how complicated a poly relationship can get simply by adding one new member.

So the next time you or your partner meets that new special someone that makes your head spin, you know just how complicated it really can be. Especially if n=6.

One Response to “Poly Math”