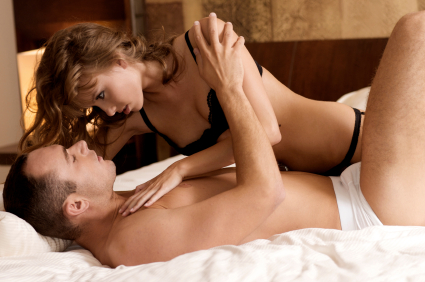 “I know for a FACT that, if I actually wanted to or TRIED, I could fuck ANY ONE of my ex-girlfriends!”

My other male co-workers nodded in unison at The Cartoonist’s affirmative statement.

I demanded that there was no way in hell any guy I’d already been with could just magically get into my pants simply because he wanted to.

His reasoning was based off the premise that, because the sexual relationship had already been established at some point, it’s a definite shoe-in for any guy who wants it from there on out.

He likened it to riding a bike: Once you figure it out, you’ll always remember how to ride it.  And every time you see it…you can just as easily ride that thing if you so choose.

I adamantly refuted any such claim, all the while picturing in my head whether or not I’ve fallen victim to this apparently inevitable occurrence myself.

Sure I’d slept with all my exes after they’d become exes.

So what, doesn’t everyone?

And yeah I didn’t stop my neighbor from tearing off my clothes and having his way with me after he broke my heart and spat on it.

It was in the heat of the moment!

And fine maybe I did get instantly wet the second I set eyes on Drummer again after having not seen or spoken to each other in four months.

Shit.  The Cartoonist was right.

Is it possible that we’re all somehow doomed to inherently respond to the physical advances of somebody who was already previously in or around our private parts?

Despite what I’ll openly admit to my coworkers, it’s definitely something I can’t rule out at this point.

The Battle of the Sexes

I valiantly attempted to figure out if this was a male-specific pattern of thought after such an erroneous conversation (there’s definitely something to be said about the fact that I was completely unaware of this phenomena in a group of five men who all somehow knew it to be true).  Of course, I took to my iPhone to implement the appropriate research.

In her article entitled “Why Do Women Get Aroused and Not Even Know It?” Jena Pincott discusses several research studies that have hooked women up to machines to measure female genital responses to various visual cues (different types of pornography).  The results of these studies found that women were oftentimes unaware of the extent to which they were physically aroused, explaining that specific erotic scenes – gang bangs, bondage, girl-girl action – did not mentally entice them while the physical evidence suggested otherwise.  She then further states that women are more prone to editing their self-reports of sexual arousal in accordance to socially desirable responding.  In other words, women are more likely to deny being into the idea of double penetration than they are to tell people, “Yeah, two dicks at a time?  SO INTO IT!”

In Jeanna Bryner’s article, “Men know it when aroused, women may not,” she talks about research dealing with the mind/body connection during sexual arousal in both men and women.  These studies have found that women are much less in sync in regards to mental and physical arousal as opposed to men whose mental subjective experiences correlated consistently with their physical experiences.  Translation:  Men get hard and they get it.  Women get wet, and they don’t quite get it.

In fishing for explanations to my own sexual surrenders, I immediately thought of muscle memory.  Muscle Memory is described in Women’s Health Magazine as the physiological blueprint created after having trained our bodies to perform a routine task.  I used to ballroom dance and, to this day, certain rhythms and beats still evoke specific, involuntary movements out of me.  There’s no thought that precedes them, my body just reacts.

Is that what happens to us when we’re around people with whom our bodies had previous reactions?

Do our bodies just instinctively know it’s “go time” before we do?

Based on the aforementioned research, it seems men are more understanding and accepting of the involuntary reactions through which their bodies proceed when in the presence of a “muscle memory”-inducing mate.  Women, on the other hand, may be less inclined to know (or admit?) the same.

With all that said, I could see it being possible that women are in complete denial over the fact that they can be subdued and seduced by any former fuck.

I can also understand the claim that women are far less pronounced in admitting what they will and will not sexually submit to.

Because I am clearly no exception.

At the end of the day though, no ex of mine is gonna get into my pants without my consent.  Period (unless of course they rape me, but we’re not even going there).  And yet, I understand the argument of all my male acquaintances, which happens to be that I will apparently always give such consent.

But it can’t possibly be considered a general rule as much as it should be seen as situational.

Yes, I’ll admit that there have been times when my body has overtaken any rational thought in regards to not having hot, nasty naughty time with Ghosts of Exes Passed.  However, I will also give myself due credit in stating that I have definitely denied access to at least one ex who tried to get to my vajay.

To me, it’s just pretty obvious that it takes a strong sense of logic and will power to overcome this apparently insurmountable force that may seemingly take place when we’re physically next to somebody we’ve been physically IN or who’s been physically in US.

Frankly, I’d like to think that the concept of any ex being a “sure thing” is completely subjective and fabricated only by those who need to fall back on the Ex Factor when they’re not getting laid.  Whether the ex is a man or woman to me is completely irrelevant, as I’m sure the same can be said about women thinking the same about their exes.

Because let’s face it ladies, we definitely think we can bed any ex-boyfriend just as easily too.

The question is, would you men disagree?

After having been born and raised on Catholicism, neuroticism, and Filipino food, JJ recently moved from the cultural confines of... Read full bio