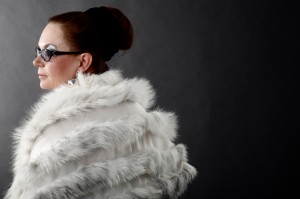 This fall and winter the fashion world has embraced fur again. Open any magazine and you’ll see fur trimmed collars, hats, boots… Fur was all over those dang pages. When I purchased the enormous fall issue of Vogue, I remember feeling appalled at all the fur. I couldn’t believe that designers were revisiting it. Hadn’t we been through all that already? I remembered blood being thrown on coats and protestors in the streets. I don’t condone the destruction of people’s property, but that’s how I remember the controversy surrounding fur.

I’m not a vegetarian, and I grew up on a farm so I understand that animals die to feed us. However, raising animals purely for their pelts never sat right with me. It struck me as wasteful. No one eats the minks after they were skinned. Or beavers. Or fox. I’ve always held my own personal protest by not purchasing anything with real fur until four years ago when I bought a winter coat with a collar made of white rabbit fur. It was one of the softest things I’ve ever felt in my life. I felt a twinge of shame as I tried it on for the first time, but a little voice whispered, “it was only one rabbit, and it’s such a small collar. It was probably a small rabbit that died of old age.” OK, so that’s a ridiculous justification, but I loved that coat. And I still wear it.

I thought fur was once again a non-issue for me until the day my girlfriend mentioned a fur coat that her mother gave her. I’m certain I looked incredulous when I said, “you have a fur coat?” It turned out that her mother bought it for a ridiculously cheap price at a thrift store and gifted it to my girlfriend. She didn’t like wearing it though, because her backpack didn’t fit over it when she had to teach on campus. I have to admit that the mental image of her hiking across the quad sporting a fur coat and a stuffed backpack made me giggle. My girlfriend took that as a challenge, and the next night she brought it with her and hefted it into my arms.

I’m now the owner of a 1970’s era real fur coat with leather trim. It falls to mid-thigh and is light golden brown. I have no idea what kind of animal made it, but it’s not fake. I haven’t been to the opera lately, so I wear it when I walk the dog around the neighborhood. I’m certain that I look ridiculous in my sneakers and yoga pants sticking out from under a round ball of brown fur. Because let’s be honest here, we curvy girls look even curvier under a heavy fur coat. Fur isn’t form-fitting. Unless you’re the animal that was born with it.

For several days I stewed about whether it was a good thing to have it or not until I finally decided to make peace with the furry gift. My girlfriend and I had a date, so I answered the door wearing nothing but panties and the fur coat. Everyone was happy with that arrangement, and I’m thinking of wearing my coat to the next play party. Naked of course.

One Response to “Oh the Fur!”