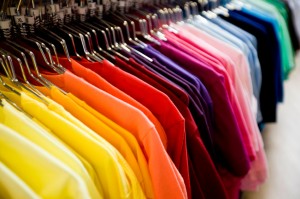 In a previous article, I touched on how our culture tells us that fashion is a female thing and while men can still be interested in it, it’s almost always coming from a female perspective (i.e. women’s fashions). There’s really a lot more to be said on this subject, especially when it comes to how gender identity is reflected in fashion. How we dress says a lot to society about how we identify and perceive ourselves and in turn how society then perceives us.

Think about a popular department store; it will have men’s and women’s clothing in completely separate locations, designating what each gender is supposed to wear. And of course the clothing is completely different….in some ways.

Did you know that this season menswear for women is a popular trend? It’s been seen on runways, celebrities and in popular fashion magazines around the country. It truly is remarkable, since until the 1970’s women were not allowed to wear pants to work! But now, women wearing pants is the norm and those that embody a more masculine look aren’t given a second glance.
But do you really think you’d ever see women’s wear, such as skirts and dresses, as a popular trend for men? Do you think you’d see male model’s donning short skirts and high heels in a fashion spread? Even the idea, to us, sounds ludicrous. Why would men be wearing skirts? If anything, it would be seen as degrading to men! Dressing as women is degrading to men. Looking like a woman is degrading. Women are seen as less valuable. Being a woman is not something that is desirable. But being a man, is.

We see women being able to cross gender lines and really have the freedom to wear and look like whatever they please. They can rock some casual sweatpants or faded jeans, they can wear fancy cocktail dresses or flouncy skirts. They can even wear a pantsuit. A woman dressing masculine is not given any thought. It’s a normal thing to do.

Men are not given this same freedom. They can’t wear skirts or dresses and be taken seriously. They are restricted to wearing some type or pant and plain shirt. You never see men wearing crazy patterns or interesting cuts. All the clothing is very blasé, very boring. I think this too is a key reason why men’s fashion isn’t really popular or talked about. It’s the same year after year. But women can play with different looks! They can explore and experiment. They have the freedom of self-expression and fun!

This notion is sexist as well as oppressive. It ultimately is sexist towards women because it puts women below men, as the feminine in fashion is perfectly acceptable for women but very taboo for men. The opposite isn’t true, women can wear men’s clothes. So, it really comes down to our preference for masculine over feminine.

But, this also enforces gender roles, which is more oppressive towards men. Since men are supposed to act “manly” and be tough, strong and dominant. This restricts men’s fashion choices, since they can only wear clothes our society deems to be masculine, making fashion an oppressive force as it limits what men can wear. When we do this, we reinforce gender roles and stereotypes as men are perceived to be one way and women another.

All in all, this is really unfair and I think everyone should be able to wear whatever they please! We should stop segregating clothing into men’s and women’s departments and just have a clothing free-for-all. Think about it; if everyone could wear whatever kind of clothing they wanted without society labeling it as feminine or masculine, don’t you think we would see a greater expression of gender and a greater amount of freedom? At least some of the chains would come off and in a lot of ways, at least in fashion, we’d be freed.