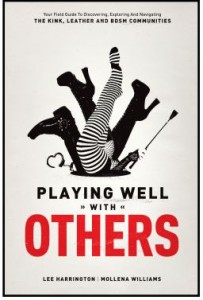 Lee –  I was at a kink conference where a guy who was new to the scene showed up and was complaining about the event… that it was so “spiritual” and not “play” oriented enough (though he was a tad ruder than that).  I asked him if he had looked at the website and seen that the event described itself as a relationship and energy focused kink event.  I then asked him why he was at the event, and he said it was the one nearest to him. He had no idea that there were a wide variety of events, and he could have gotten his needs better met at a different conference.

I realized then that no one had written a book on the topic, so I started doing so.  After working on it for a chunk of time, I gave up. I felt too burned out on the topic. I asked a number of folks if they might be interested in collaborating, and they were all so excited about what I had already done, and wanted to help finish it.  Mollena on the other hand said it was a good idea, but had great ideas on different directions it could go, and brought her own vision to the project. I knew she had to be my co-author on the project :)

Mollena  – Lee approached me having already embarked on a search for a collaborator on a very ambitious topic and project. Upon seeing what he’d written, and after getting my feedback on where I felt we could take this and managing to help dissolve some of the overwhelming nature of an undertaking this massive,  we both agreed we would work together well and had similar enough passion and dissimilar enough experience to really make an impact with this project.

Bringing a book from idea to print is a commitment of creativity and discipline, how did the process go?

Lee – I showed up to the first multi-day session that Mollena and I had scheduled to do with 70+ pages of notes. No, really.  I had been working for a while, and it was insane.  She and I took topics and rearranged them, cut notes into pieces and threw the pieces of paper into different piles, weeded stacks of stuff that did not need to be in the book out – it was an intense process. After that it was days at a time of writing retreats, rounds of back and forth on google documents, too many hours pouring over notes, and of course lots of cupcakes.

Mollena – It was delightful. It was far less lonely than working on my previous project. I felt like I had to up my game, as I was challenged by someone I respected to make this project happen. I had to find out how to communicate my ideas not just on the page but to the other person with whom I’d embarked on this journey. Ultimately it was an unparalleled chance to work on something with another person who was also in there for the long-haul. I wouldn’t trade it for anything.

Lee – Playing Well is a great way not only to learn about the wide variety of paths available within the kink community, but also figuring out *your* right path through the exciting choices out there! Plus, getting to find out about how to avoid social pitfalls, and wipe out a stack of myths that pervade about the kink communities before you even get involved, is such a stress relief.

Mollena – Hopefully it will help folks have an opinion about what acceptable behavior looks like. I hope that people who read the book will be less likely to take everything they see and hear about the community at face value, and have a reference that is trustworthy and reliable. I think it also helps serve as a reminder for those who have been around for a while to refresh and level-set and remember what brought us here and what keeps us coming back.

I love that you encourage readers to find the right experiences for them, do you have any recommendations if someone has a bad first encounter?

Lee – Consider looking at how to *not* repeat the patterns that happened last time. If it was meeting a solo person off the internet, look into meeting folks at a local Munch instead. If it was the fact that that big kink conference was too overwhelming, examine what smaller events might be a good fit for you. There are a lot of choices out there for how to pursue first steps, and why do the same steps a second time?  Also… be kind to you as you figure it all out.

Mollena – Take a look at what was difficult in the encounter: was it miscommunication? Was there intentional overstepping of boundaries? When scenes are difficult (I don’t use the term “bad” because I feel it makes pejorative something that could be a learning experience) often there is the desire to lay blame. Rather than point fingers, see what your part In the issue was: inexperience? Communication? Was it just a bad day? Or was it negligence? If it was a situation where you were treated poorly or deliberately injured, this is a very different situation. If something criminal is perpetrated, it is my opinion that pressing charges is always an option. However, most problems encountered are due to mis-communication and decompressing after the experience and then communicating with the involved party helps to salvage the situation and bring it back around to something that can help you grow.

Both of you have been long time leaders in the kink scene, what is a favorite memory of a time when you “played well with others”?

Lee – I think the opportunity to act as an “interpreter” between the different parts of the kinky sex communities has been one of my favorite experiences in the scene(s).  Helping Leathermen talk to cuddle party folks, swingers talk to BDSMers, fetishists to sex nerds – those moments when folks go “oh, I get it” totally light me up.

What advice would you give to others who would like to publish a sexuality related book?

Lee – Figure out why you really want it out there.  Assess if anyone has written a book on the topic already by doing a *lot* of research, and ascertain whether your book will add something new to the catalogue out there. And find a great editor, even if you are self-publishing, please. Our community, and your vision, deserves excellence and correct grammar.

Mollena – Write what you are passionate about. And don’t expect to get wealthy from it.

Is there anything else you’d like readers to know about “Playing Well With Others”?

Lee – Whether you are a wide-eyed explorer or a jaded veteran, there is something for you to check out with the book. Let’s get the conversation going on how to create a healthier, sexier, sustainable commUNITY!