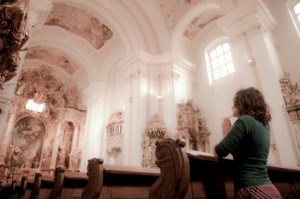 My ex-husband and I stood awkwardly together on the front porch making small talk when he came to pick up our daughter.

“I’m going to pursue an annulment,” he said, apropos of nothing. “I hope you cooperate.”

I stammered out an affirmative reply as my stomach lurched, and as soon as I was back in the safety of my house, I began to cry. It wasn’t the spiritual separation I dreaded. We will always have our daughter and be linked in that way, but that’s the only remaining tie as far as I’m concerned. The Catholic Church doesn’t recognize our physical separation of households or our legal divorce, however. No, the Church must conduct its own investigation for an annulment, and the idea of it makes me physically ill.

The fundamental problem I have with this is that the annulment process pits spouse against spouse just like the legal system does. This isn’t a gentle, touchy-feely therapy session where my ex and I can dialogue about where things went wrong. This is one partner giving evidence as to the fundamental lie or omission in the marriage, and the other must admit that the case against them is accurate in order to receive the annulment. When my ex said that he was seeking this, I was overwhelmed by the feelings of powerlessness and fear that I experienced before when we were separating. The difference now is that instead of using a lawyer to attack my sexual proclivities, he’s using our church.

The annulment panel doesn’t want to hear about the end of our relationship or why it fell apart. They don’t care that the man petitioning them sued for full custody and tried to leave me penniless. The Church wants us to go back to the beginning and find that one big thing that made everything wrong, so that in the Church’s eyes the marriage can be deemed null and void. I know exactly what my ex is going to say. He’s going to blame BDSM, and he’s going to accuse me of lying to him about it. Essentially everything that we created as a couple, aside from our child, will be judged invalid according to Church law because I enjoyed handcuffs and being spanked. I don’t know if I should laugh or cry about it. How can something as complex as a marriage be reduced to one wrong?

Forewarned is forearmed, so I began researching the annulment process. Although the specifics of the investigation and judgment vary depending on the Dioscese, the basic laws are universal. The Catholic website I found referenced this scripture as a basis for The Church’s doctrine on marriage: (from the Old Testament Book of Genesis) —At the beginning of creation God made them male and female: for this reason a man shall leave his father and mother and the two shall become as one. They are no longer two but one flesh. Therefore let no man separate what God has joined— (Mark 10:6-9)

In the words of Father Joseph M. Champlin, rector of Immaculate Conception Cathedral in Syracuse, New York, “the complicated process of annulment then is a response to the strength of this teaching. The Church presumes that marriages are binding and lifelong. The annulment process helps to determine if something essential was missing from the couple’s relationship from the beginning that prevented the sacramental union that the couple promised to each other.”

In my opinion, it’s an excuse to give a divorced couple another reason for contention. My ex will claim that kink was the lie I was hiding, and just like that, it becomes a slanted back and forth of he said/she said. My ex is seeking the annulment which makes him the “victim,” and I’m the lying slut that’s supposed to agree. At least, that’s the scenario my fearful brain is creating. Without full disclosure of my sexual preferences when we were dating, the ex will prove that this lie nullified any bonds of matrimony. The panel will then ask for a list of people who will corroborate his story. I will be on trial yet again, this time from a panel of people from my own church community and whichever family and friends he uses as witnesses.

I loved my ex passionately and with my whole heart. Yes, I had some racy sexual adventures before I met him, but I threw that all aside for the chance to settle down and be his wife. We hoped and dreamed for the same things, and we both wanted children. I was committed to our married life, and for nine years I poured everything I had into creating a stable, nurturing environment for the two of us. So much so that I lived in denial about my own sexual needs. I made the best life I could with a man who criticized my appearance and discounted my contributions to our marriage. If anyone wants to be angry about lying, it should be me. I lied to myself, and for years I told myself that divorcing him wasn’t an option because I was a good Catholic and a good wife.

Translated, my ex-husband’s version of “cooperating” means that I’ll agree with whatever sexual deviant charges he levels at me, and the mere thought of taking the fall for his easy-out of our marriage makes me furious. I won’t lie, not for him. Frankly, I think it’s immoral of the Church to demand that one spouse shoulder the blame in order to receive the couple’s annulment. I feel compelled to speak my truth, and at the same time, I resent my church for questioning and judging my life. In a place where I go for spiritual refuge and guidance, I’m going to have to bare my soul in ways that I fear will irrevocably change my relationship with Catholicism. I’m afraid that the peace I find in worshipping as a Catholic will be replaced by anger and mistrust of the dogma that rules Church policy. Part of me fantasizes about letting my freak flag fly and announcing to the world that I’m not afraid to be a kinky Catholic who is poly and “out there.” But I have my child to consider, and she needs protecting from the bullies and bigots of this world. Even when that bigot is her father.

One Response to “His Annulment Makes Me Question My Religion”