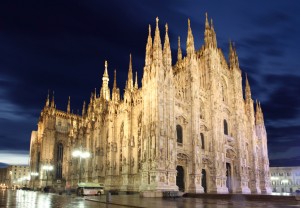 The first time I stepped inside a Catholic church was in Quito, Ecuador. I was a college student living abroad and fascinated by the cathedral that sat at the center of the city. The flagstones leading to the entrance were worn by the footsteps of thousands of feet and almost black with age and grime. The impressive cathedral sits at the center of Quito’s historic district, and even a non-Catholic (I didn’t convert to Catholicism until two years later) like myself couldn’t help but be impressed.

If a religion ever wanted to make an impression on the farm girl in me, a cathedral was the way to do it. The paintings, sculpture and the gold on the altar… all of it combined into a blur of awe punctuated by the ever-present smell of incense. I walked around the periphery of the sanctuary with a group of students, only half-listening to the guide. It was all breathtaking, and there was no denying the sacred feeling to the place. What drew my attention, however, was the man prostrate on the floor in front of the altar.

He lay on his stomach with his arms stretched out straight at shoulder level in the shape of a living cross. His eyes were closed, and I watched his lips move with prayer. Goosebumps rippled up my arms, and I recognized something. I felt a connection with the man that transcended gender, nationality and economics. I saw his need to humble himself, his desire for humility before God. He could have been praying for so many different reasons, but a vision coalesced in his still form, something that I longed for with all my heart and soul. That indigenous gentleman was more beautiful to me than any statue of Christ. He had taken action in a way that I had never been able to label, even though I knew the feeling in my heart of hearts.

After converting, several curious friends asked why. One of the first reasons I listed was that I loved to kneel. As a kinky person, the statement always held a double entendre for me, but it was still true. On Sundays I loved kneeling and asking for God’s forgiveness. I wanted to physically humble myself and repent my misdeeds. I wanted my knees to ache from the wooden kneelers as my elbows rested on the hard pew. I wished for there to be no ego, no pretense of worthiness. I love that my physical presence echoed my internal need for forgiveness.

As I relocated over the years, I’ve resisted attending certain Catholic churches because they no longer kneel. My odd background of Anabaptist youth and Catholic conversion leads me to compromise on several key tenants of Catholicism; hell being one of them. One of the areas where I’m most strict is being able to humble myself in church. Outside of a scene with my Dominant, church is the only other place where I submit. I submit to a higher power and a greater spirit, endless in its possibilities. For that brief hour I am the smallest pinpoint of light in a vast, limitless power. I am purely, humbly myself at the feet of God.

2 Responses to “Humbling Myself”